by Alan Rumrill, reprinted with permission, from a recent Newsletter from the Historical Society of Cheshire County 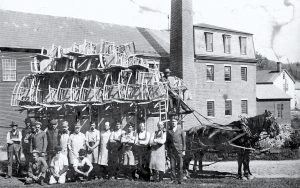 A load of chairs from the Colony Chair factory in Munsonville.

The coronavirus pandemic has resulted in substantial numbers of people working from home as a way to accomplish social distancing. This process has the potential to remain commonplace into the future, perhaps resulting in social and economic impacts on the country. The residents of the Monadnock Region were involved in some of the earliest work from home undertakings in the 19th century, which were the result of social and economic changes occurring at that time.

The three leading forms of working at home in this region involved palm leaf hat manufacture, weaving rattan seats for chairs, and weaving covers onto some of the larger bottles made in local glass factories. This outwork, as it was known, signaled fundamental changes to the American economic process as the countryside transitioned to a new form of capitalism.

The palm leaf hat industry was an important element in the economic structure of southern New Hampshire during the mid-1800s. The outwork system involved the distribution of raw materials by store owners to New England farm families who used the raw materials to make finished products in their homes. The 155-year-old palm leaf hat account book of Reuel Nims of Nelson details this system of trade. Storekeepers imported the raw palm leaf from Boston and sold it to local families. These families took the leaf home and braided the finished hats; they then returned the hats to the store and received store credit for them.

Between June of 1865 and June of 1866 ninety-three women from eight towns braided 8638 hats for Reuel Nims. These women received an average of 12 cents in store credit for each hat they made. The $1000 that they earned was a considerable amount; factory workers in Nelson in 1860 earned an average of $27 per month.

Another form of working from home involved the weaving of chair seats for local factories that began producing large numbers of chairs in the mid-1800s. By 1900 the region’s chair shops were turning out as many as 1 million porch rocking chairs annually; many of these had woven seats and backs. Many hands were required to accomplish this amount of work, and local families became involved. As with the hats, farm families traveled to the factories near them to obtain the frames of the chair seats, as well as the rattan they would use to weave the seats.
The Mountford family, trying to survive on a failing farm in Stoddard, began weaving chair seats for extra income in the late 1800s. They drove their wagon several miles to a chair factory in a neighboring town to pick up seat frames and rattan, wove the seats, and returned them to the factory where they received 10 cents for each seat completed. One winter the family earned $34.64 weaving seats. This outwork resulted in sorely needed cash income above and beyond the normal bartering for household necessities. 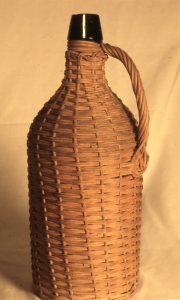 The final significant form of outwork in the area was related to the region’s glass industry. Glass factories in Keene, Stoddard and Lyndeborough produced millions of bottles between 1815 and 1886. Some of the larger bottles, called demijohns, were covered with woven rattan or pliable willow twigs, chiefly to protect them from breakage. As with hats and chair seats, this bottle covering chore was undertaken by local residents in their homes. The Webber family, recent immigrants from Switzerland to Cheshire County, worked to weave coverings onto bottles for the Granite Glassworks in Stoddard. In 1860 Webber, his wife Mary and 18-year-old son were all employed “willowing bottles.” This was the family’s main source of income. Many other families in the glass manufacturing communities took bottles into their homes to weave this protective covering by hand.

The residents of southwest New Hampshire were involved in early forms of “working from home.” Their work was not the result of a pandemic, but resulted from fundamental economic and social shifts occurring as a result of the burgeoning American Industrial Revolution. The shift from small workshops operated by skilled artisans to large factories producing huge quantities of goods was well under way. The invention of larger and more sophisticated machinery meant that more products could be made more rapidly in mills, and improved transportation, especially railroads, allowed the shipment of goods to distant markets. On the other hand, families living on declining farms in shrinking hill towns needed additional income to survive. These factors combined to give rise to the outwork system. 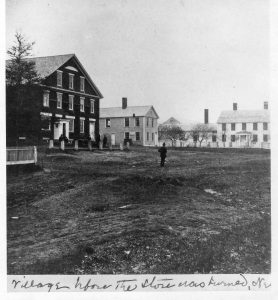 Reuel Nims’ store, (on the left)

The annual output of 8,638 hats made for Reuel Nims’ store and 14,000 demijohns made at the Granite Glassworks was not all sold locally, but was shipped away to distant markets. The agrarian economy of the United States was shifting to one based more on factories and manufacturing. The Industrial Revolution was reaching into homes across the region, and bringing additional income into those homes. Furthermore, much of this income was being earned by women, another shift in the nation’s economy. All 93 of Nims’ palm leaf hat makers were women, and the credit they earned was used by them in his store.

The mid-19th century movement to work from home resulted from an industrial revolution. Today’s work from home movement has been facilitated by a technological revolution, allowing workers to maintain a connection to files, information, social media, and contacts that they normally access in their offices. Despite these vast differences, working from home then and working from home now have accomplished the same result – allowing workers to earn much needed income during a time of need.