We know of the existence of a mill here prior to 1788 because of a road laid out by the Town of Packersfield in November of that year as follows:

“Voted to accept of a road laid out December 3, 1788 beginning at a hemlock stump marked on the south side of the road about 15 rods east of Ensign John Browns mill thence southerly by marked trees to a rock maple tree marked near the line of Packersfield and Marlborough to meet a road in said Marlborough the road to be on the west side of the marks three rods wide.”

Later Josiah Woodward built or rebuilt a mill here in in about 1805 or 1806. He built a dam and a flume and erected a saw and gristmill. Josiah and his sons ran the mill until 1846 when he sold a half interest in all his holdings to his son, Josiah M. Woodward. The deed gives a good account of the farm and the mill:

His son rebuilt the mill in the early 1850’s; it contained a sawmill a gristmill and a fulling mill. Josiah M. Woodward move to Keene in 1856 and the mil was operated by several different owners past the end of the Civil War. In 1886 the City of Keene acquired the site fir a city water supply and the mill was removed.

Some years ago a small part of the mill foundation was visible. The city of Keene us repairing the dam at Woodward Pond (2020) and all that remains are a few scattered blocks of stone. 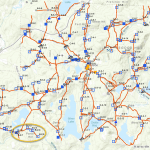