Winslow was the third son of Philip Atwood II and his wife Eunice. Philip and Eunice seem to have left their old house at C-4-19 sometime prior to 1858 and built here. They died in 1867 (Philip) and 1871 (Eunice) and are buried in the Village Cemetery. Their son Winslow may have built the house here around 1858. Neither place appears on the map of that year, but deed references make it fairly certain that they were here. Winslow married Lorana Ellis of Swanzey in 1866 and the couple had two children. Winslow and his brother, Oriel, ran the mill at C-4-20 for a number of years. The family moved first to Nelson Village and finally to C-4-17 before moving to Swanzey where they died. Both are buried in the Munsonville Cemetery.

They were followed here by George B. and Mary Anne Jenkins in about 1870. They were succeeded by George Robbins and John Holbrook who bought the 70-acre farm in 1887.  John sold his interest to George in 1899. George Robbins never married. He seems to have been joined by his sister Hattie and her husband, Edward Towne. The Towne’s daughter, Grace, married Don L. Warner in 1922 and they took up residence here and established the Warner family in Nelson. Their son, Don C. Warner, succeeded them. The Warner family lives there today. 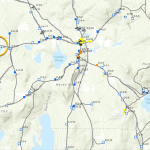