There is a modest cellar hole and barn foundations at his site. Joseph Felt bought this lot in 1779 and probably built the house. William Priest came to Packersfield the same year after service in the Revolutionary War. He enlisted from Temple, New Hampshire, but appears to have come originally from Walpole. He first cleared land at C-5-7 beginning in 1779 where Joseph Felt settled. In 1781 he and Joseph Felt exchanged properties and Priest brought his wife, Bathsheba, and several children to live here.  In 1791 he sold to Jacob Sheldon and seems to have returned to Walpole. Jacob was there until 1794, selling to Thomas Baker. George Toman may have lived here in the early 19h century. The place was abandoned by 1840.

The site was, much later, the site of a log cabin built by Frank Foster in about 1903.  Some of the artifacts to be found in this cellar hole are evidence that Foster’s cabin may have been set on Priest’s foundation. 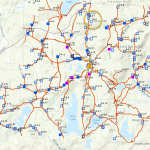