The area just east of Granite Lake had a number of small farms established around 1800. William Dewey bought this land in 1805 and built a house. He wasn’t here long selling the place to Jesse Bennett of Ashby, Massachusetts in 1810. He was there two years before moving back to Ashby. He sold it to Isaac Fisher who incorporated it into his larger farm just over the line in Stoddard. The deed transferring the property from Bennett to Fisher gives an idea of the nature of the place:

“Said Bennett shall have the right to let the house stand where it is or move it off any time within two years from the date hereof and the said Bennett is to have the crop of rye which shall or may proceed from the rye now sowed on part of the afore-described premises and the privilege of gathering said rye at his pleasure.”

We do not know whether the house was moved or how much rye was harvested by Jesse Bennett, but the road to the place was discontinued by the town in September 1811. The site was nearly destroyed when the Route 9 bypass of Granite Lake was created. The new road runs a few feet east of the old Dewey Place. 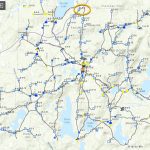