William Beal seems to have come to Packersfield before 1772. He succeeded as miller at the grist mill (at the outlet of Pleasant Pond (now Silver Lake, C-1-3)) succeeding Daniel Wood as operator.

In 1785 he left the mill and moved to this location to begin his life as a farmer. William and his wife, Molly, seem to have at least three children. Beal sold the farm to Henry Wheeler in 1802. During the next 38 years, Wheeler grew the farm from 50 to several hundred acres. 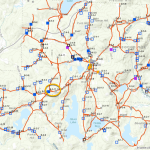