This small cellar hole was, likely, a cabin built by Richard Newton in 1770. Newton appears in Breed Batchellor’s report of settlers who has left Monadnock Number Six by 1773. Newton was one of many early settlers who cleared land and built cabins with no clear title to the property. He had a family of six in residence and twelve acres cleared by the time he left in 1773. There was no one living here in the 1774 settlement surveys and no one on the property until William Barker bought the property from the confiscated estate of Breed Batchellor in 1781 and built at C-4-11. 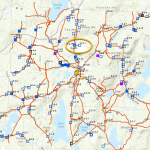