This year, the pond in my front yard froze over on November 15, a full three weeks before the deeper, clearer, windier lakes in the area. Our pond is a small, shallow puddle ringed by a protective army of white pines.

After the first skin of ice appears, the waiting game begins. We watch the ice, wondering if, for a miraculous day or two it will turn out to be good for skating, or whether snow will come too soon and the pond will turn into a flat, white, featureless (except for the ice fishermen’s bob houses) field for the winter.

When the ice is good, we drag dead trees out of the woods, pile them on the ice, douse them, light them, and throw a skating party. Nobody can understand why the bonfire doesn’t burn a hole in the ice and drop through, bringing us all down with it. As the bonfire burns, it melts the ice, which creates an insulating layer of soggy ashes between the ice and the fire. I wish I could tell Robert Frost in response to his powerful poem, that the world will end in neither fire nor ice. It will end in soggy ashes.

I love to skate, particularly at night. Last year I found a disreputable pair of men’s figure skates. They were ripped down the back, the laces were crusted with rust where they’d hung on a nail, and the blades looked as if they hadn’t had an edge in decades, but they fit! After a lifetime of skates transforming my toes into lifeless, pale-blue cubes, a decent fit was a gold mine. I duct-taped them together around my ankles, and I was off.

If there’s wind, you can hold a sheet up with a friend on the other side and go clattering down the ice, trying to hop over the ice-fishing holes and frozen fish. For hockey games, the best puck is a Budweiser can, squashed end-to-end, but I imagine a stale bagel would do just as well.

One year, an actress friend of mine was visiting from Los Angeles during a skating party. Like Odysseus preparing to poke out the Cyclops’ one eye, we grabbed burning sticks out of the dying fire and stages a sword fight in the dark, the glowing ends of our swords streaking orange against the darkness, showering the night with sparks when they struck. As we jabbed and jousted, my friend quoted from famous sword fights in Shakespeare. We ended up with coats pockmarked with little burn holes.

A tradition started by neighbors of mine is to ring the pond with two hundred luminaries – candles in white paper bags weighted down with sand. It started on New Year’s Eve several years ago when a beloved long-time resident of Tolman Pond was dying of cancer, and she could see the ring of lights out her window. 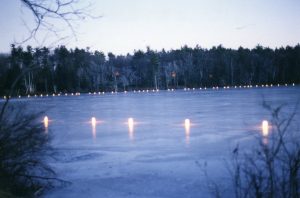 That year, the weather was warm and misty, and the ice on the pond was slushy. People came home from their parties and gathered in quiet knots by the edge of the pond, finding it difficult to go to bed while the candles still burned a silent witness to the turning of the year, when the end and the beginning of light and time and life come together.

The next New Year’s Eve, the night was moonless and starry. When the temperature is going down, you can hear the whole pond shifting and cracking, murmuring and belching, as if digesting all those frozen frogs.

This year, the cold and the snow came in the wrong order, and until the rainy weather of the past few days, the pond was covered with a corrugated surface unsuited for skating. Shantytowns of bob houses started to appear. And so a second waiting game has begun. We watch the sky anxiously, wondering if the snow will come and get deep and fluffy enough to cover the stumps and boulders and brush on the hill above our house to make a decent toboggan run.