New England’s ancient Town Pounds are seen near the center of most towns even today. Substantial, square and made of large stones, town pounds are New England’s most  enduring and emblematic features of our agrarian past. Most towns have one that survives; Nelson has two!  They were built to hold the largest and most agile of domestic animals in temporary custody, protecting crops and precious cows, pigs, horses, sheep, oxen, etc until their owners could recover them.

Nelson’s first pound was built at the same time as the meetinghouse (1773) and almost directly across the road from it. This suggests they were of similar importance in the early function of the community.  It was a twenty-foot-square stonewall six feet high with a door and an iron lock.  By 1783 this first pound proved to be too small, and a larger replacement, thirty by thirty, was built. The walls were also stone, six feet high, three feet thick on the bottom and one and a half feet thick at the top with another foot of boards extending above the stone.  This pound had a four-foot wide gate and a door with iron hinges with a lock and key. David Beard, the lowest bidder, built it for 11 pounds. It still stands today in the woods on the east side of Lead Mine road across from the Coughlin’s pergola. 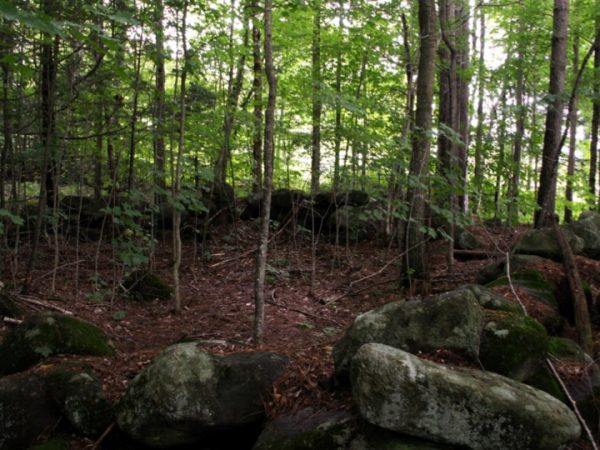 Many animals kept in the pound had broken out of their home enclosures, but hogs were routinely left to run wild. Pork was the principal meat for Packersfield families in the early days. Left to roam free, hogs could grow and fatten on nuts that accumulated on the forest floor (mast.) In March 1788 Packersfield voted “to let the hogs run wild with being yoked and ringed according to law.”  A Pennsylvania statute from 1705 spells out the purpose and design of these rings and yokes: “rings in their noses sufficient to prevent their turning up the ground and triangular or three cornered yokes or bows about their necks and to extend at least six inches from the angular point or corner sufficient to keep them from breaking through fences.” The ordinance was renewed year after year in the early days of the town.

Apparently the newly enlarged pound wasn’t large enough or, perhaps, although convenient, it was just a little too close to the meetinghouse. At the March town meeting in 1795 the town appointed a committee to “build a pound of stone 35’ square the committee to recommend the height of the walls. Voted to set the pound in Capt. Ezra Smith’s pasture on the northerly side of the road.”

This pound has been difficult to locate. Ezra Smith had land in several parts of Packersfield — in Munsonville and on the Old Stoddard Road, Brickyard Road and Tolman Pond roads.  To find where things were two hundred years ago, it is often helpful to talk to someone with roots in a place. Barry Tolman remembered his grandfather referring to a “hog pound” on Tolman Pond Road.  It is there today just off the north side of the road and down hill from the road to Barry’s shop. It seems likely that the 1783 pound was abandoned when this, the third, pound was built.

To help bring order to the animal world, the town elected officers to protect the animals and crops. They elected a pound keeper and a number of hog reeves. The pound keeper was in charge of all stray animals. Strays were brought to the town pound where the pound keeper locked them up. Here the pound keeper collected fines from their owners when they came to get them. Ezra Smith held the office of pound keeper almost continuously from 1786 until he moved from Nelson in 1823 at age 68.  He lived just up the hill from the third pound at the “Dixon Place.”

The office of hog reeve is more interesting. The hog reeve rounded up all stray pigs. If the owner of a hog had not ‘rung’ and ‘yoked’ their hogs, and the hogs got loose and became a nuisance in the community, one or more of the men assigned as hog reeve would be responsible for capturing the animal and performing the necessary chore for the owner; who could legally be charged a small fee for the service. Hog reeves were also responsible for determining any damages and levying that assessment on the animal’s owner.

Some historians write that the office, a serious community responsibility in the early days, became a joke. The voters would often elect the prissiest man in town or all the newly wed men as hog reeves. In the 1850s Charlestown elected their minister, Dr. Whittaker, to this office. No Nelson minister was so honored. What we can say from Nelson records is that almost no one held the office more than once. In the early days there were usually three hog reeves; after 1785 the number elected each year varied from two to seven.  Was this a joke played on the men of Packersfield/Nelson or a timely reaction to the fertility of that years’ sows? Not all those elected were young, married men; some were middle aged and “prominent,” but the high “turnover” in the position and the fact that two were “needed” some years and seven in the following year suggests voters were having some fun. 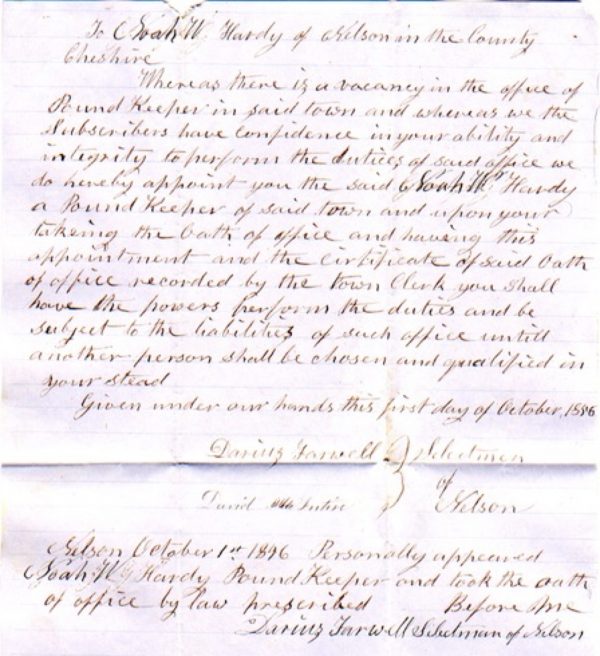 Most records of election are a simple line in the minutes of a town meeting.  In 1856 Noah W. Hardy, a substantial farmer, was appointed as pound keeper to fill a vacancy until someone could be properly elected.  This document appears in the Ethan Tolman Papers.

Not all strays ended up in the pound. The following notices were posted regarding loose horses and cow. (Click images for enlargement) 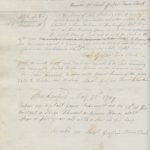 Taken up by Capt. James Bancroft on the 20th of this instant a large chestnut or brown horse about 4 or 5 years old with a white star on his face. 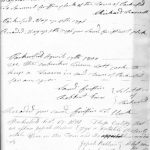 Broke into the enclosure of the subscriber on the 4th day of May two colts one mare two years old dark brown with a little star in her face, the other a horse one year old light bay with a white star in his face. The owner or owners may have said colts with paying damages.  Richard Farwell 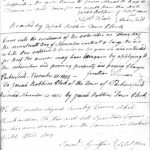 Came into the enclosure of the subscriber on this the 7th day of November a large red and white cow supposed to be 9 or 10 years old and intended for beef. The owner may have her again by applying to the subscriber and proving property and paying charges. Jonathan Wyman.

Owners marked cattle and sheep. Those marks were recorded in the town records. From the records of 1824: Ebenezer Harris marked his cattle and sheep by slitting both ears and cutting off the “under half” of each ear; Nathan Griffin marked his sheep with two slits in the right ear.

Nelson maintained its pound until 1878 when the town meeting voted to discontinue its use and sell the property.