Thomas was born in Marblehead, Massachusetts in 1775 and came to Packersfield with his parents, Nicholas and Betsy (Scripture) Gurler immediately after the Revolutionary War.  Nicholas, Thomas’ father, died in Packersfield in 1785 and the young Thomas went to live with Samuel Griffin’s family at (D-3-6) where he later would rescue Griffin’s two young sons when the house caught fire.

The Gurlers moved to Keene in 1823.  Susannah died in Keene in 1830; her husband in 1858. Both are buried in the Hurricane Road Cemetery there. 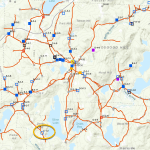