Little remains of this home site. It was graded in when a large field was cleared recently.

Thomas Upham was one of the earliest settlers on Monadnock Number Six arriving in 1769. By the settlement survey of 1773, he had 18 acres cleared, a pole hose built and his family living there. He sold the place to Jonathan Felt in 1774 and moved to C-3-2.

Jonathan Felt and his wife, Martha, came from Lynn, Massachusetts. Jonathan was a signer of the Association Test in Packersfield in 1776 and served in the Revolutionary War. He probably replaced the log cabin with a frame house They had seven children. He sold the property to his son the year before he died in 1807. Jonathan JR. sold in 1808 to Josiah Fletcher from Chelmsford, Massachusetts. He was followed by his son, Gardner in 1819. The place was abandoned a few years later. 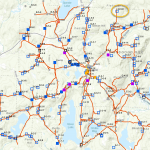