This cellar hole has been recently graded over and cannot be seen today. Thomas Reed came to Packersfield, Massachusetts with his wife, Phoebe (Wright) Reed in about 1796 when he bought 100 acres from Timothy Fox. They probably brought their youngest child, Phoebe, with them. They built a house here and welcomed their second child, Lucinda in June 1797. Phoebe died in 1804. In 1832 he sold the farm to his son, Thomas (b. 1803). It seems Thomas and Phoebe continued to live here until her death in 1837. She is buried in the Village Cemetery.

Thomas and Phoebe’s daughter, Lucinda, married Jerre Scripture, son of Samuel and Mary Scripture (D-2-13) in 1818 and made a home nearby at D-2-9. Jerre died in 1838 and Lucinda married George Harrison of Nashua. Thomas seems to have moved with his daughter as he died in Nashua in 1841. The place was abandoned about this time. 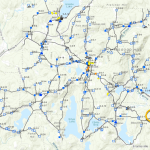