Thomas Holt was the oldest son of Daniel Holt and married Polly Bevens in early 1785. They moved to his father’s house in Packersfield (E-4-3) in 1785 and welcomed their first child the same year. A tanner by trade and part of the Holt family from Andover, Massachusetts, Thomas Holt bought the southern half of his father’s lot in 1788 and built a house. They had six more children before moving to New York State in 1804. They sold the place to Nathan Town of Andover. The home was probably abandoned at that time. 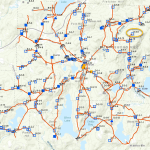