The Wilson Mill: Situated at the outlet of White Pond today is a very large stone dam, a ruined concrete gate and spillway and numerous stone piers that held the structures of the mills here from 1796 to the end of the 19th century. It is referred to as the Wilson Mill after Asa Wilson its longest tenured proprietor. The dam is broad enough to provide vehicle access to the mill buildings on its top. At the height of its operation, the dam probably raised the level of the pond by 10 feet or more.

The first mill was built here in 1796 by Henry Melville. It was a gristmill. He probably built the miller’s house (D-4-5) at the same time. Melville operated the mill until 1828 when he sold it to Asa Wilson. Asa, the oldest son of Archaelous and Sarah Wilson, seems to have lived on the family farm (E-4-13) until his mother died in 1825. He quit farming and went to work for Henry Melville occupying the miller’s house on this site.  After running the mill for 27 years and at the age of 73, he sold the mill to Silas French and retired to the Lydia Felt house (D-4-23) in the village. He lived to age 92 and is buried beside his wife (d. 1847) in the Village Cemetery.

Silas French was not a resident mill operator; he lived in an elegant house at C-3-7.  After French’s death, the mill had several owners and was eventually bought by Caleb Goodnow, a miller from Sullivan. He idled the mill and sold it to George Devaul with the proviso that it never be operated as a gristmill again. Devaul converted it to a sawmill and operated it a short time before being killed in an accident there.

After the death of George Devaul, the mill was purchased by Edmund Barton of New Ipswich who purchased and lived at the Lydia Felt place In the village. He ran the mill until 1877. The mill may have been operated a few years longer by John H. Osgood. 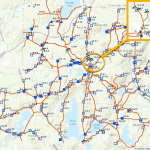 by Alan Rumrill, reprinted with permission, from a recent Newsletter from the Historical Society of Cheshire County A load of chairs from the Colony Chair factory in Munsonville. The coronavirus pandemic has resulted in substantial numbers of people working from home as a way to accomplish social distancing. This process has the potential to remain commonplace into the [...]

B-2-1 Woodward Pond Mill We know of the existence of a mill here prior to 1788 because of a road laid out by the Town of Packersfield in November of that year as follows: “Voted to accept of a road laid out December 3, 1788 beginning at a hemlock stump marked on the south side of the road about [...]

B-4-10: Winslow was the third son of Philip Atwood II and his wife Eunice. Philip and Eunice seem to have left their old house at C-4-19 sometime prior to 1858 and built here. They died in 1867 (Philip) and 1871 (Eunice) and are buried in the Village Cemetery. Their son Winslow may have built the house here around 1858.

E-4-14 A barn on the Archaelous Wilson farm.

A-3-1 William S. Buckminster William “Stoddard” Buckminster bought land here from his father Solomon and built a frame house here about 1810. The brick house that stands there today was an addition likely added in the 1820’s. Born in Rutland, Massachusetts in 1778, he married Hannah, daughter of Bartholomew Grimes in 1806. They had two sons, Franklin and David. [...]

C-5-6 There is a modest cellar hole and barn foundations at his site. Joseph Felt bought this lot in 1779 and probably built the house. William Priest came to Packersfield the same year after service in the Revolutionary War. He enlisted from Temple, New Hampshire, but appears to have come originally from Walpole. He first cleared land at C-5-7 [...]

D-4-27 Upton bought the former Jonas Davis farm and replaced the original Davis farmhouse which was slightly further up the hill.

C-5-9 William Dewey The area just east of Granite Lake had a number of small farms established around 1800. William Dewey bought this land in 1805 and built a house. He wasn’t here long selling the place to Jesse Bennett of Ashby, Massachusetts in 1810. He was there two years before moving back to Ashby. He sold it to [...]

B-3-11 William Beal William Beal seems to have come to Packersfield before 1772. He succeeded as miller at the grist mill (at the outlet of Pleasant Pond (now Silver Lake, C-1-3)) succeeding Daniel Wood as operator. In 1785 he left the mill and moved to this location to begin his life as a farmer. William and his wife, Molly, [...]

C-4-11 William Barker moved to Nelson in 1779 and, occupied the farm first cleared by Richard Newton (C-4-16). There is no deed evidence of his purchase of lot #3, range 12 in the Northeast Quarter, but road records and a subsequent transfer of a half interest to his son, Leonard, are proof that he built the place and lived [...]

C-4-16 This small cellar hole was, likely, a cabin built by Richard Newton in 1770. Newton appears in Breed Batchellor’s report of settlers who has left Monadnock Number Six by 1773. Newton was one of many early settlers who cleared land and built cabins with no clear title to the property. He had a family of six in residence [...]