The Tolman Farmhouse: The original settler of the land on the north end of Tolman Pond [then Little Pond, later, Byrant Pond] was Jabez Grover who built the house at E-3-13 just up the hill. We lack deeds to definitively determine who built this house and when it was built, but a brick in the central chimney has “1791” inscribed into it and there’s no reason to doubt that date. That brick is the first Tolman family connection with the farmhouse. It was undoubtedly fired at Ebenezer Tolman’s brickyard at E-3-5. Tolman family lore and Parke Struthers credit Amos Bryant with building the house. Bryant bought the place in 1805 and town tax records confirm his arrival then.

The house was probably built by Stephen Beard on land owned by his father, David. Stephen may have started on the Grover place before building the farmhouse on the pond. He was the seventh child of David and Mary Beard. He and his wife, Sally (Twitchell), married in 1793 and had four children. Stephen died of hydrophobia in 1802 as the result of the bite of a rabid dog. His widow sold the place to Amos Bryant, a cordwainer from Reading, Massachusetts, in 1805.

Amos brought his wife, Martha (Barker) and many of their nine children. They were in their early fifties and making a new beginning. Sons, Francis and Palmer, soon expanded the family leather business by establishing a tannery on the property at E-3-14. Palmer and his family contracted with Amos to provide for him and his younger sister, Harriet, for the balance of their lives. They probably shared he house with his parents. His mother died in 1819 and Palmer, himself, died in 1822. Francis picked up the responsibility.  Tragedy added its woes to Francis’ family. His two-year old son, George, fell into one of the vats at the tannery and drowned. His seven-year-old daughter and four-year-old son died of dysentery—all in 1832. His sister died in 1833 and their father five weeks later. Perhaps just overcome by grief, the family left Nelson for Illinois.

Henry Melville, a local financier, bought the place and, immediately sold it to Thomas J. Baker who was there three years before selling it to the Tolman family in the person of George Tolman. He moved here from F-3-1. George was the second son of Ebenezer, the founder of the Tolman clan in Nelson. He was reunited with the brick from Ebenezer’s yard forty-five years after it was laid in the center chimney of the house. This began a Tolman tenancy that has persisted for five generations so far.

George and his wife, Joanna, had six children, but found themselves with no heirs ready to carry on. After Oren Tolman, his nephew, returned from service in the Civil War, George offered him the farm if he would care for him for the balance of his life.  This Oren did until the old man died at age 89 in 1875. Oren lived the balance of his life there and was succeeded by his son, Wayland. Wayland and his wife, Sarah (French) established a retreat for summer and winter guests based on providing a country experience for people from more urban areas that persists to this day. Wayland and “Ma” Tolman were succeeded by their son, Francis, and Florence “Floppy” Tolman and they were followed in the tradition and at the farmhouse by Barry and Karen Tolman. Many of their guests are in their fifth generation, too. 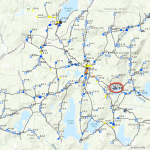