Nelson’s population had peaked by the time Nehemiah Flint bought his farm in 1827. The sheep craze had resulted in 85 -90% of the land being cleared. It was the height of the family farm producing surpluses sold into other states. But farmers were beginning to move west for more fertile, stone-free soils. The Erie Canal, opened in 1825, was beginning to bring the products from New York and Ohio back east at lower prices. In Nelson raising crops gave way to sheep herding and that brought the consolidation of small farms into fewer, larger ones. These changes were reflected in the structure of the community. Grist mills converted to saw mills and shoemakers started tanneries. Families increasingly added on non-farming activities to support themselves. The increasing scale of new industries provided employment. This is the story of one Nelson family.

The farm the Flints were to buy had been cleared by Eli Burnap and run as a farm since 1795. Stephen Harrington had bought it and established a tannery and a brickyard on the place. He sold the main house and the tannery operations to Asa Spaulding and the farm with the old Burnap house and brickyard to Nehemiah Flint. Grist mills, saw mills, brickyards, tanneries, and a cotton mill evidenced Nelson’s diversifying economy. Soon graphite (”lead”) was discovered in town. All of these provided employment opportunities outside the traditional family farm. Flint financed his $1,175 purchase, as most did, by taking out a mortgage. 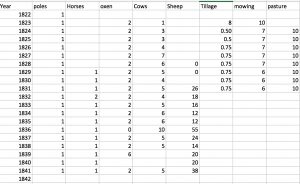 Flint was born in Stoddard in 1796. He first shows up as a taxpaying citizen of Nelson in 1822 with a pair of oxen, 11 cows and 8 acres in tillage. Perhaps he rented the farm he was to purchase. The next year at twenty-seven he married Mary Baker of Nelson in the meetinghouse on the hill in a ceremony performed by the Reverend Gad Newell. Six months later their daughter Sarah was born followed in late 1825 by another daughter, Cynthia. By 1827, Nehemiah had enough credit to buy his farm cleared by Eli Burnap some thirty years prior. Two years later they welcomed a son, Thomas.

The Flints moved into the Burnap farmhouse across from the Spaulding tannery. The house was no more than two hundred feet from the tannery across the road and supplied the tannery with water via an aqueduct that crossed Henderson Road. The odor of the tannery must have been awful. The owner, Spaulding, chose to live away from his smelly business on Center Pond Road.

For the next twenty years, we know something of their lives. The death of a child was common in 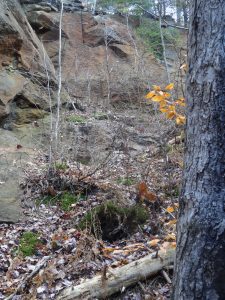 early Nelson and the Flints lost their first born at four. They buried little Sarah up on the hill where they’d been married. Their last child, Susan, was born in 1846. Flint operated his farm and his brickyard. The farm was small, but they had done well enough to acquire a horse by 1829. He joined the sheep boom late acquiring a herd of twenty-six in 1831. There were over three thousand sheep in Nelson that year and several farmers had herds of three hundred. He did laboring work off the farm as well perhaps working at the Spaulding tannery across the road. When the Osgood lead mine off Old Stoddard Road opened in 1848, Nehemiah found work in that open-faced quarry. 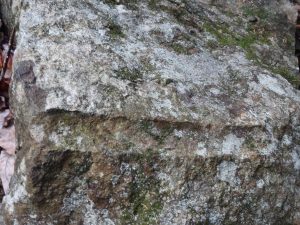 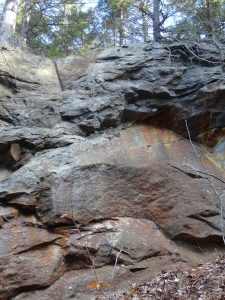 Mine Face with Drill Mark.

Today that quarry is a large, open scar on the side of Osgood Hill with huge rocks piled up at the bottom each bearing the marks of the drills used to plant the black powder charges that blasted them from the rock face above. On October 3, 1850 one of those falling rocks killed Nehemiah Flint. The fifty-four-year-old father and husband was buried next to his daughter, Sarah.

Financially, his life had been a struggle; after more than twenty years he had almost as much debt as he had in the beginning. His estate inventory gives us a picture of a small time farmer. 1 pair oxen, 7 cows and calves, 28 sheep, 4 pigs and the tools it took to run a farm. This is the picture of a farm that, in a good year, could produce a surplus, but which could not sustain a family. Those who succeeded at farming in this period had amassed huge farms and were running herds of several hundred sheep. The Tarbox family had over five hundred acres; the Burnap farm, six hundred, and Horatio Osgood, at whose mine Nehemiah Flint met his death, had over one thousand acres of cleared land on City Hill. Farms the size of the Flints and their farmhouses had been largely abandoned by 1840 and consolidated into larger operations as Nelson’s population began a one hundred year decline.

Flint left the farm and $855 in debts to his widow, Mary, and their daughter, Susan. The biggest debt was the mortgage of $722.71 owed to another Nelson widow, Lydia Melville. Most early farms had mortgages and most were held locally not by some distant bank. Mary had to sell her farm to pay the debt to her neighbor, Lydia.

To raise cash, she sold two thirds of the property almost immediately to the Spaulding family under an agreement that allowed her the use of one third of the house and farmland. For some time after her husband’s death Mary and her daughter were provided food at town expense. She retained use of the aqueduct and the hog house. She clearly needed to raise some of her own food. Two years later she sold the remainder. With the proceeds she invested in a mortgage to Mr. Jasper Baker on the house, where Susan Hansel lives now, and bought a modest house next door to the Colony Cotton Factory  in Munsonville. Presumably she lived modestly on her mortgage interest. Or maybe she worked at the mill. She died in 1867 and is buried, not with her husband and their daughter, but in the newer cemetery in Munsonville. With the meetinghouse on the hill gone, perhaps the place had just too many sad memories.