Born on Southington, Connecticut in 1763, Gad Newell was the second minister called by Packersfield and the longest serving, He trained for the ministry at Yale and was serving a congregation in Berwick, Maine when he got the call to Packersfield in 1794. Upon arrival he lived at D-3-11 while he built this house. The following year he married Sophia Clapp and in 1796 the couple moved into their new house. They had five children beginning with Oliver Pomeroy Newell, born that year.

The Reverend Newell took over a growing congregation whose services were held in a recently constructed, large meeting house on the old common where the Village Cemetery is today. He retired from the ministry in 1841 serving 43 years and having added 301 members to the congregation.

Meanwhile Oliver Newell had received his MD from Yale University and worked as a doctor in a number of places before returning to Nelson with his wife, Betsey Greenwood, in 1836. They moved in with his parents and were given a half ownership in the farm in 1842. That coincided both with Gad Newell’s retirement the year before, and the establishment of the new church building (where it remains, in the present day village). Upon retirement, Gad moved into the village, in a house that had been owned by Lydia Felt, near the new church (currently Bert Wingerson’s). He continued to participate actively in services until his death in 1859 at the age of 95. He is buried in the Village Cemetery directly beneath the where the pulpit had stood within the now-dismantled church in which he had preached for so long.

His son remained at D-3-4 until 1863, at which time he and Nehemiah Rand (D-4-28)  bought each other’s houses (essentially trading). This house is located on the other side of the church from where Gad had moved to, and later became the home of writer May Sarton. Newell lived there until he died 1877.

Nehemiah and Harriet Rand lived here at D-3-4 until his death in 1870. In 1873 his widow sold the home to Gideon Vigneault. The home is currently owned by Betsy Street. 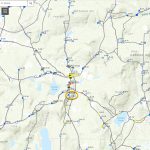