This two-story brick house was built by Abel Richardson about 1815. We know little about this energetic early citizen. He operated the mill at D-4-7 then lived and may have operated a tavern at D-3-11 before building this brick home on a hill in 1815. He seems not to be related to the family that settled at Merriconn.

He sold the farm to Nathan Griffin, second son of Samuel Griffin, in 1835. They transferred it to their son, (General) Simon Goodale Griffin, and he sold it upon his return from service in the Civil War in 1865.  General Griffin’s family seem to have lived in during the later part of his service and never returned to Nelson. Nathan and his wife, Sally (Wright) lived there probably until 1865.

It was bought by George Washington Osgood, grandson of Nathaniel Osgood, who lived there until his death in 1907. It was inherited by his son Charles Carrol Osgood and passed out of the family on his death in 1945. 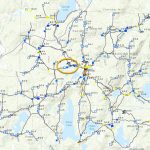