Levi Warren purchased 100 acres here from Thomas Packer (III) in 1790 and probably built a house. Struthers writes that Warren lived here; he is listed in the 1790 census as a Packersfield resident. The Rev. Seward, in his Sullivan History, credits the house to Nathaniel Osgood. The current two-story hip-roofed house has an ell that connects it with a barn. The ell is said by the current owner to be the older part of the place and was, undoubtedly, Warren’s original house.  In 1793 he bought the property to the west in Sullivan where he later built a large house.

Nathaniel Osgood and his brother, John (D-4-8) came to Packersfield from Andover, Massachusetts. Nathaniel bought this farm in 1798 and probably enlarged the house significantly. Nathaniel and his wife Abigail, raised for children here and, upon his marriage, their son, Samuel and his wife Louis (Griffin) moved in and started their own family. Nathaniel (1852) and Abigail (1865) died there and are buried in the village cemetery.

Lois and Samuel had two children, Simeon and George Washington before Lois died in 1839 at the age of 35.  Samuel remarried Elizabeth Wilson and had five more children including Henry Melville Osgood who succeeded in ownership when his father died in 1865. Samuel and Lois are also buried in the village cemetery. Henry and his wife, Mary (Goodhue) lived on the place for only two years before selling it to Oscar Beverstock. He sold the now 175-acre farm to Albert Davis in 1870. Davis farmed there until he moved to Sullivan in 1899.

The Reverend William Conrad bought the place as a summer residence. In 1906 an illness forced Conrad to move permanently to Nelson where he served as pastor in the parishes of Sullivan, East Sullivan, Nelson and Harrisville. He also served in Keene and Georgetown, Massachusetts before retiring.  The family owned the place until his death in 1957. It is currently owned by Aubrey Murdough. 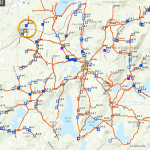