Home Life in Nelson: The Old Village on the Hill

Home Life in Nelson: The Old Village on the Hill

Two manuscripts of historical interest came to light during the closet-cleaning needed to ready the contents of the Hardy homestead for the auction held last July. One details a lifestyle in our town that has long since vanished. It describes many activities centered around the home and farm as well as social customs of the early settlers. The second manuscript is concerned with the physical setting of the old town center of Packersfield up on the hill where only the old cemetery and a few houses now remain. (The town adopted the name of Nelson in 1814.)

Both articles were written early in this century by the Rev. Edwin Noah Hardy (1861-1950) who also wrote several books as well as the Hardy family genealogy. He tells of old Packersfield in the second decade of the 19th century as it was remembered by the few residents who were still alive at the time of his writing. Hardy makes reference to a map that was to have accompanied the text, but, unfortunately, that map is missing. In its place, I have sketched a new map based on his descriptions. More selections from these manuscripts will be printed in future issues of the Grapevine -2. The edited excerpts from Packersfield/Nelson: The Old Village on the Hill that are printed below should help to give us a visual image of the old village as it used to be and provide a background for subsequent selections from the Hardy manuscripts.

A Bird’s-eye View of the Village: 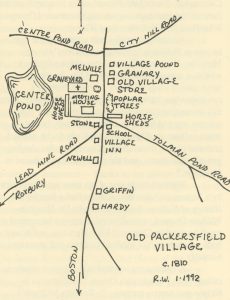 The main turnpike, running almost due north and south, crossed the public lot, the common, at the very top of the hill. In the hollow south of the hill, the highway forked; the road to the right (Lead Mine Road) led to Roxbury while the other, the old turnpike to Boston, continued directly south across the steep side of Seaver hill and on to Massachusetts via Dublin. Originally this turnpike passed over the summit of the Newell hill joining the present highway in front of the Hardy house. On the top of the hill, on the common, was another road running nearly due east down to the valley and thence over the Beal’s hill.

The old meetinghouse stood on the west side of the main turnpike and nearly opposite the junction of the east road. It faced south overlooking the large and beautifully sloping Training Field. Along the west side of the Field was a driveway and beyond it a long row of horse sheds extending to the Melville line. Behind these sheds to the north was the old burial place always knows as “The Graveyard.” Diagonally opposite the meetinghouse at the southeast fork of the roads was the old schoolhouse facing north. On the opposite side of the east road and facing the schoolhouse was another row of horse sheds. Somewhat back of these on the roadside were several stately Lombardy poplars which have been a beautiful landmark for more than a century.  Just over the turnpike on the west side was the first pear tree of the neighborhood which tradition affirms was fully a century old. This tree was blown down in 1908.

Following the turnpike still further north were three notable buildings. On the west side of the road were the beautiful and commodious buildings of the Melville homestead. On the opposite side of the road was the old village store with the granary south of it. Some twenty feet south of the old granary was the well-known and much used village pond.

Taking the turnpike to the south from the center of the village was a building often spoken of as the Village Inn. [This building was the first meetinghouse that had been built on the top of the hill by the settlers in 1772-73; it was known as the “duty meetinghouse.”]  It was located at the fork of the road [Lead Mine Road]. As the population increased, the old duty meeting house proved inadequate and in 1786 a large, commodious, and commanding edifice was begun. The old building was moved some fifty rods [825 feet] to the south and made into a residence which later became the Village Inn and also, tradition declares, the village rum shop.  But it did not long continue as such since it was located midway between the “red house” and the Newell house in which dwelt, respectively, Mr. Oliver Stone and Rev. Gad Newell. Both were pioneers in the temperance movement arising all over New England and radically opposed to the use of ardent spirits and all kinds of intoxicating drink. The rum shop was soon remodeled into the Kittridge cabinet shop and later removed to the new village. Somewhat reduced in size it formed the framework of the Taft house. [This property is now owned by the deMartellys on Center Pond Road and the old building still survives in its third location!]

Still further south on the hillside was the beautiful Newell house. An eighth of a mile further was the Griffen house. Between these two houses there may have been another house though statements concerning it are very conflicting. These buildings were few, scattered, and unpretentious yet there is hardly a page of the early town history which is not in some way associated with them.

The old village site was one of the beauty spots of this highland neighborhood affording a panoramic picture of surpassing grandeur. The unobstructed view to the northwest insured the most glorious sunsets on the far away Green Mountains. That to the east and north gave the majestic outline of “City Hill” with its graceful contour merging into the distant Hurd hill and the nearby Pinnacles. To the south was the beautiful valley with stately, blue, old Monadnock in the distance. Westward, below the steep hillside that in early times was an open field, was Center Pond, a veritable gem in a setting of emerald. When the village was in its prime, in all probability, there were few or no stone walls and few trees in the near vicinity. The sloping sides of these cone-like hills were grass-covered and beautiful in their graceful simplicity.