The Nelson Town Hall Over the Years

The Nelson Town Hall Over the Years 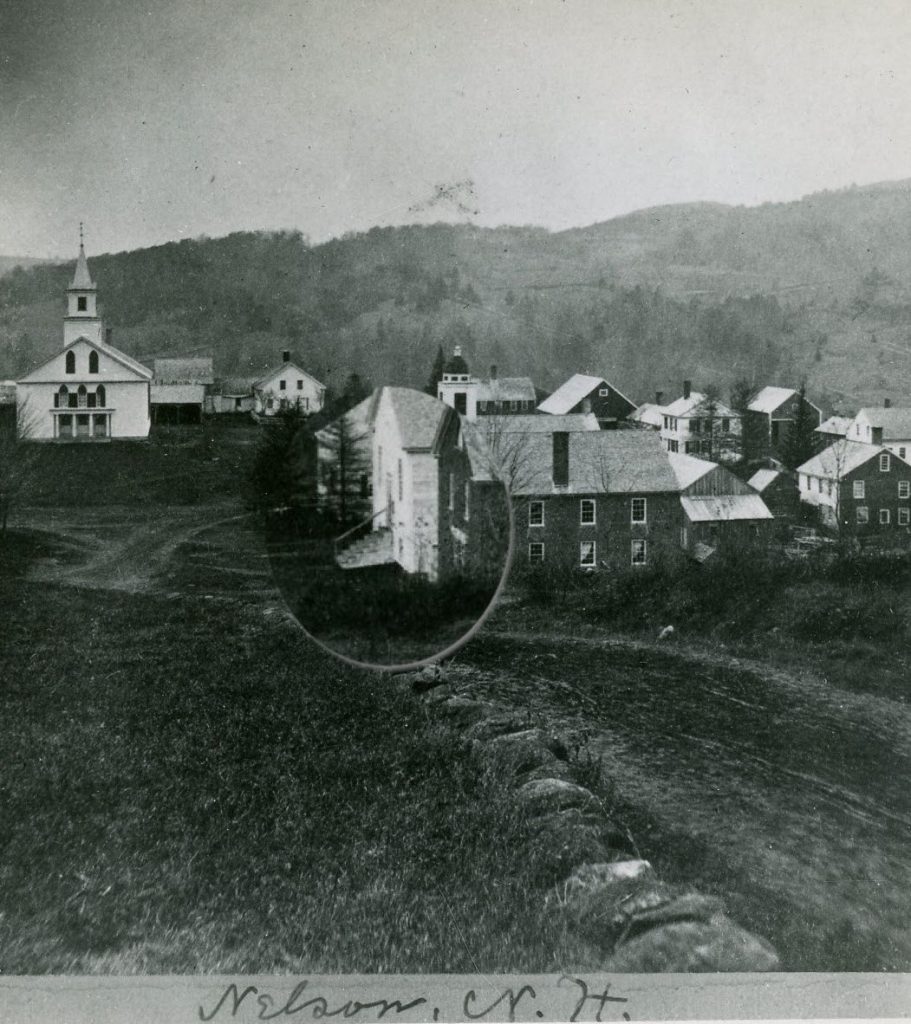 Karen Tolman was going through some old pictures of Nelson this spring and came across this picture of the center of Nelson taken sometime in the late nineteenth century. One notices immediately how densely settled our town center was then. Karen’s eagle eye noticed that our town hall had front steps in those days and that the building looks taller than today. Karen, Bert Wingerson and I have solved some of this puzzle using old photographs, original town records, a very interesting deed and a history of town buildings written by the Reverend Millard Hardy (1850-1939.)

The history of the Nelson Town Hall that stands on Nelson Common today is one of periodic change and renewal. It was built originally in 1846 using pieces of the Second Meetinghouse and new material. Once the Congregational Church was finished and ready for use, the Second Meetinghouse on the old common was disassembled. The porches were removed as intact units and moved to their current location on Old Stoddard Road and reassembled as the home of George Whitney. Jack Bradshaw owns “The Porches” today. The forty-five by sixty foot frame was disassembled and substantially reworked to become the present Town Hall. This Town Hall was taller than it is today and had front steps. It has been changed a number of times to accommodate the needs of the Town. 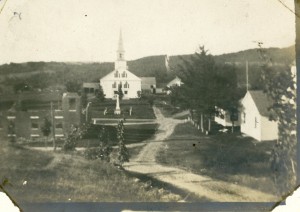 On the common: the remains of Melville and Nims store, also known to serve as a hotel.

What has become the center of the village today began to be developed when the land in that area was sold off in small pieces following the death of Henry Melville in a black powder explosion in April 1838. The current village center was created at that time with most of the current houses dating from that period. Part of that development was the large brick store built on what is the common today and owned by Jonas Melville and Reuel Nims.

Nims owned the land where the Town Hall is today and his mercantile operation needed storage space. He sold the town the right to build a town hall on that land provided that it built a building thirty-four by forty-eight feet with an eight-foot basement that Nims and his heirs would have the use of forever. A good chimney, which Nims was required to maintain, provided his storage space with heat. This deed is dated October 1, 1846. 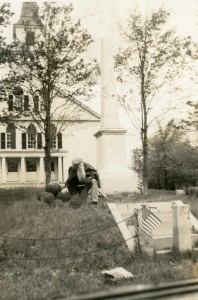 The Reverend Millard Hardy, Nelson’s Congregational minister, serving twice in the late nineteenth and early twentieth centuries, in an unpublished and undated manuscript in the Nelson Archives, provides a fuller description:

“Of the principal Public buildings there remains one, The Town Hall. This building is of historic interest as it was built from the frame of the old church on Cemetery Hill. About two thirds of the frame was taken. I imagine the posts were used full length as the building was so high the entrance was by a long flight of steps. When once inside the building you were confronted by row upon row of seats arranged upon an incline and mounting up to the second story windows. There was a great basement used by traders for the storage of molasses hogsheads, oil barrels. These furnished the boys sport especially on rainy days. And after bestriding these substitutes for horses through the noon hour you can imagine the condition of their clothes especially their breaches.”

The inside and the outside were quite different from today.

For some reason the Nims store seemed to outgrow its need for a storage space under the Town Hall. The March 1859 Town Meeting instructed the selectmen “to purchase the basement story of the Town House and land adjoining belong to Mr. Nims if it can be bought at a reasonable price.” Though there seems to be no record extant, that this was accomplished, the Town seems to have owned the building upstairs and down by 1878. That year the town “voted to take out the under part of the Town Hall and lower the house to the underpinning.” This simple motion seems to have lowered the building removing “the rows of seats mounted on an incline.” We can therefore date the photograph above to 1878 or earlier.

The Reverend Hardy’s narrative continues: “Perhaps 25 or 30 years after its erection this building was remodeled and put into its present form. This building was chosen by our Patron Saint. [likely Henry Melville, grandson of the other Henry] as a support for his beautiful memorial to the soldiers of the Great Civil war and many visitors are attracted to it in consequence. This building was mercifully preserved from destruction by fire a few years ago when the corner house was destroyed when for some time only a garden hose and a hand extinguisher or two stood between it and the devouring element.”

The next major renovation occurred in 1892 in the aftermath of a bitter vote by the Town to move town meeting and all town business to Munsonville. Meetings were held and all town business transacted in Union Hall in Munsonville for the years 1891 and1892. Though an article in the Keene Sentinel at the time makes it clear that the state of the building was not the major factor in the move, the Town Hall was extensively repaired in 1892 before the town moved its business back to Nelson Village:

Keene Sentinel
Date: Wednesday, March 18, 1891 Volume: XCIII Issue: 11 Page: 5
Town meeting has come and gone, and perhaps it may interest the outside world to know, as in the days of the civil war “All is quiet on the Potomac;” so we make the announcement. Circumstances over which we had practically no control having rendered it inadvisable to attend that meeting, we are obliged to take reports concerning it, at second hand. We think we speak advisedly in the statement that the vote of the town transferring all future town meetings, and the transaction of all town business, to Munsonville, by a meager majority variously stated at from one to not over three, said vote being secured by the action of a good number, owning little or no real estate, as a flagrant disregard of the rights of a majority of real estate owners of the town which is unprecedented in the history of Cheshire county.

The most recent, significant, change took place in 1934:
“Voted to raise for the purpose of making a ladies toilet in the Town Hall $125”
And: “Motion made and seconded that the town authorize the selectmen to contract with the Public Service company for electricity in the town buildings for 5 years at an annual rate of $150 per annum. Passed by full vote of all present. Voted the Selectmen be authorized to raise or appropriate such sums as are necessary to wire the town buildings.”

Almost eighty years later we have a building committee helping to figure out what the old building needs today.[to view enlarged versions of each picture, click on the image and it will open in a separate window]

Click captions  below to see full sized versions of the images in this article. 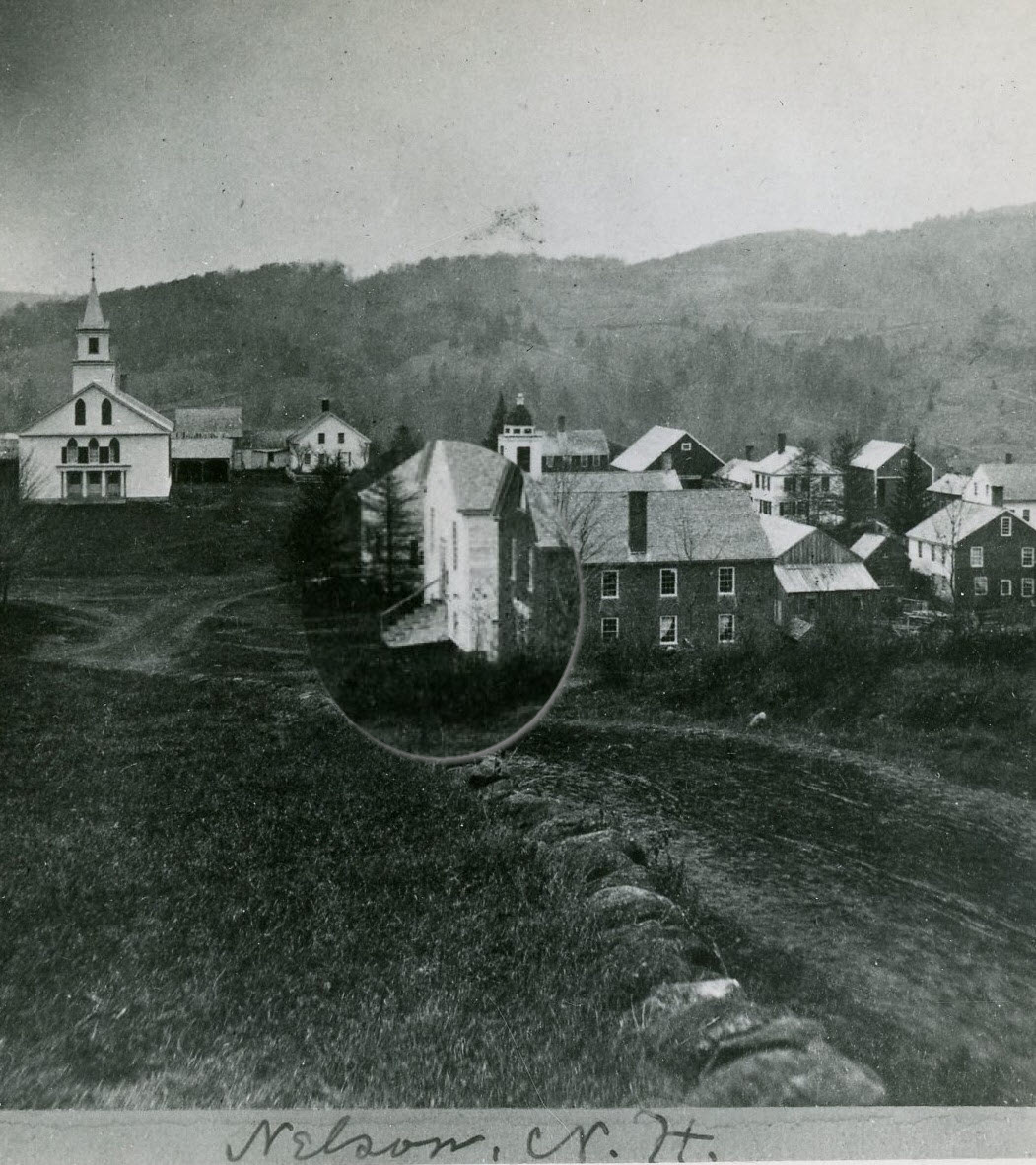 On the common: the remains of Melville and Nims store 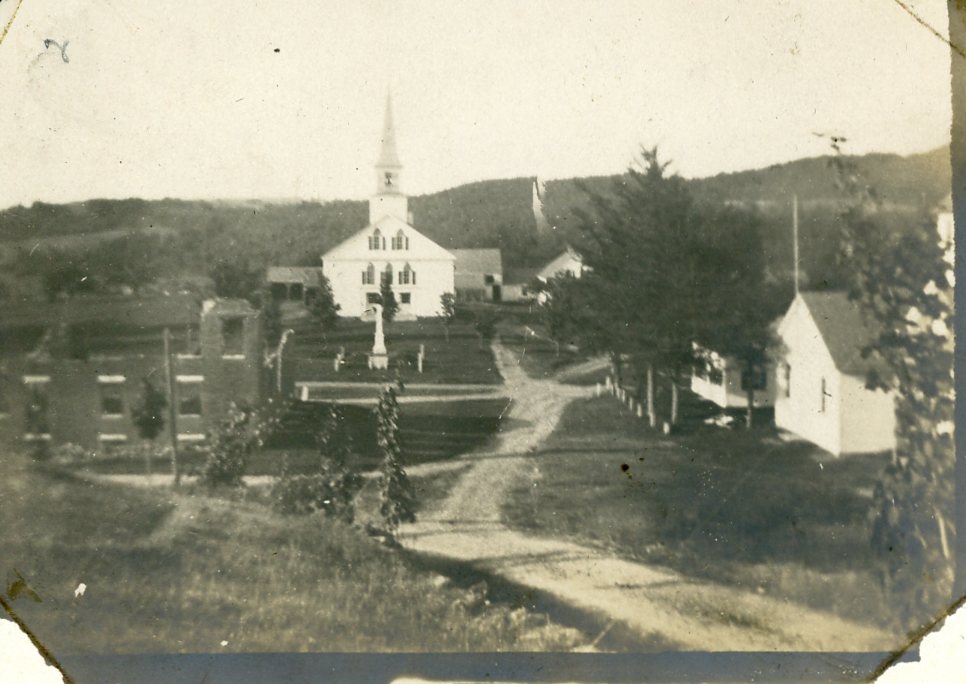 On the common: the remains of Melville and Nims store, also known to serve as a hotel. 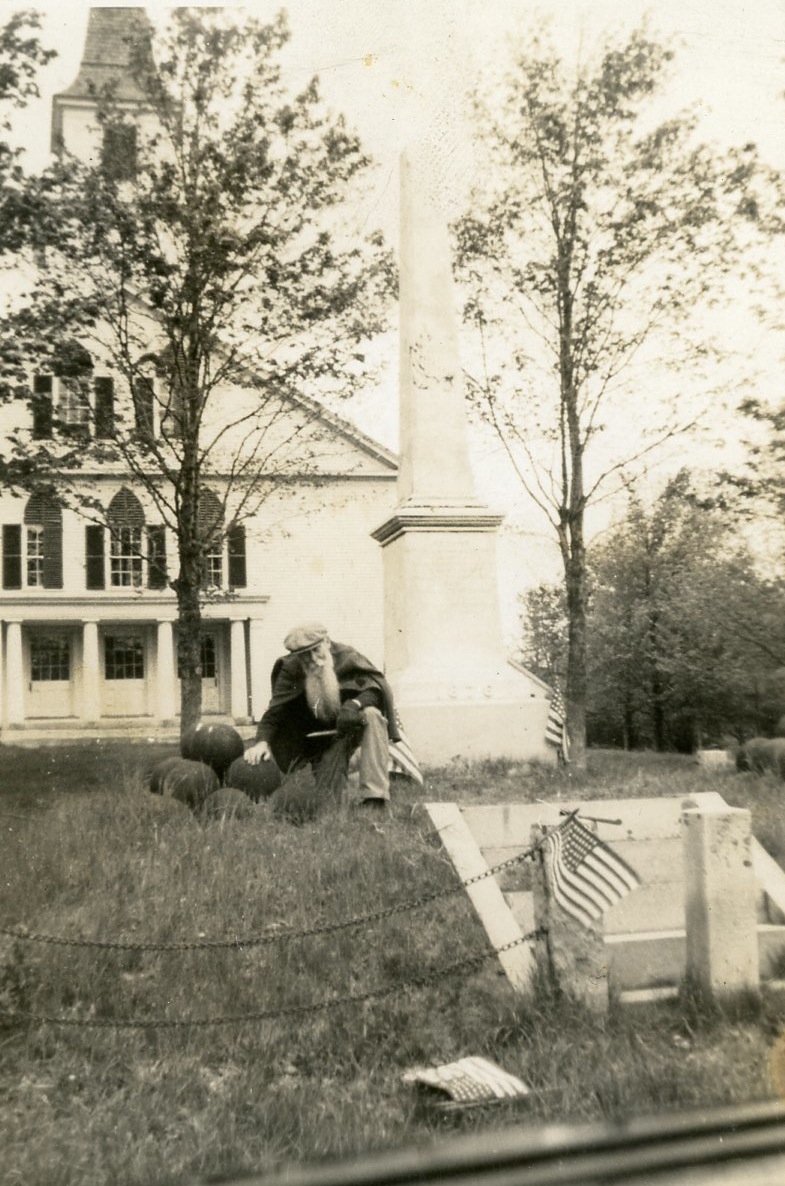