Jonas Davis: Jonas Davis bought 100 acres of land here in 1778. He served in the Revolution from Rutland, Massachusetts responding to the Lexington Alarm and serving several enlistments as late as the end of 1777. In 1783 bought an additional 50 acres, married Hannah Woods and built this house. Their first child, Sally, was born here on August 20, 1784.

Davis’ property contained the brook that drains White Pond. The brook had enough fall and volume to attract the interest of people wanting to build mills. In 1786 he sold two small pieces on the brook. He sold 14 acres of land on the north side of the brook to Levi Whitcomb where that man built a blacksmith shop. Whitcomb probably lived at his shop in the beginning, but acquired the Davis house and 4 acres in 1797. Davis also sold small pieces of land along the brook to Henry Melvin who built a grist mill there. He moved his family to D-4-27. In 1800 Whitcomb sold the place to a widow named Phoebe Upton. Sixty-one-year-old Phoebe immediately attracted the attention of William Barker, her twice widowed neighbor just up the road to Stoddard at C-4-11. The pair were married in 1802.

In 1817 the Barkers sold this place to Moses Bairsto.  In 1824 Moses sold the place to Samson Robbins and purchased a larger farm further out the road to Stoddard. A few years later Robbins moved to Marlborough and the place became part of the Burnap farm. It was probably not used as a hose after 1830. 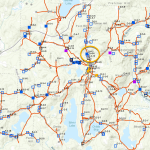