The Dogs of Nelson

The Dogs of Nelson

Among the many interesting items I discovered while organizing the Nelson town archives several years ago was a slim volume entitled “Registry of Dogs.” It covered the years 1891 to 1902. I kept a mental note of it, deciding then to take a closer look later when time afforded it. My original intent was to compare dog’s names of 100 years ago with contemporary ones, but I found in looking over the records that they really offered more – a social commentary on the times.

I chose 1893 to compare with 1993 records. Then, as now, one of the blanks to be filled in for each dog was its breed, or lack thereof, the latter signified by the undistinguished designation of “mixed.” I had assumed that a rural farm economy of 1893 would have a large population of dogs and that many of them would have been classed as mixed breeds, as I seem to have remembered from that part of my childhood spent on a farm in Portsmouth, New Hampshire.

However, only 26 dogs were registered in 1893, and given that a dog not registered as required could be shot in those days, it probably represents a fairly accurate count. This small number may be explained by the fact that the relative cost of registering a dog was high and the human population of the town had been declining (295 in 1900) since better farmland had opened up to the west.

Almost two-thirds of the dogs were listed by breed with shepherd (7) and hound (6) the most popular. Nine were listed as mixed breeds. The shepherds most likely were working dogs tending the dwindling number of sheep raised for wool for the mills of Harrisville (wool could be shipped from the West at competitive prices).  The sport of hunting was probably supported by the hounds listed.

Only five of 26 dogs registered were listed as females in 1893 compared to 100 years later, when males and females are equally represented. This reflects the high cost of owning a female in 1893 ($5.00) versus a male ($2.00). To get a clearer picture of the value of a dollar in 1893, we can look at the wages paid at the nearby mill in Harrisville.  A skilled foreman in the weave room of Cheshire Mills would have to work two full days to earn enough money to pay the registration fee for a female dog. A worker with lesser skills would have to work three or four days to earn the fee.

This may have been a very effective way of keeping the canine population under control in the days before spaying and neutering. Presently, the fee is the same for males and females, $7.00, but reduced for a spayed or neutered dog. All but one of the dogs listed as mixed breed were altered and, overall, 82 percent of the registered dogs had been, a testimony to the responsibility of their owners.

Of the 92 dogs registered in 1993, there was a marked increase in the number of pure-breed dogs; only 10 percent were listed as mixed breeds while 23 different breeds were represented. The most popular were golden retrievers (11), shelties (10), and Labrador retrievers (10), all good-natured family dogs. With only one working farm left in town, the need for working dogs is gone and they are now selected for the appealing characteristics of their breed.

Almost all the shelties are the offspring of Pixie, the first sheltie owned by Dot French, who began breeding them about 25 years ago. They have gained literary fame through May Sarton, who lived and wrote in Nelson and owned one of Pixie’s puppies, and Elizabeth Yates, who owned another of Pixie’s progeny and wrote about her dog in “The Seventh One.”

Well, what about the names?  I was not disappointed in the 1893 registry. There I found good old Spot (2), Rover (3), and Jack (3) as I had expected, and even a Colonel and a Major. The names were divided between unpretentious “people” names such as Peter, Bruno, Johnnie, and Nellie and descriptive names such as Curley, Nip, Watch, and Laddie. 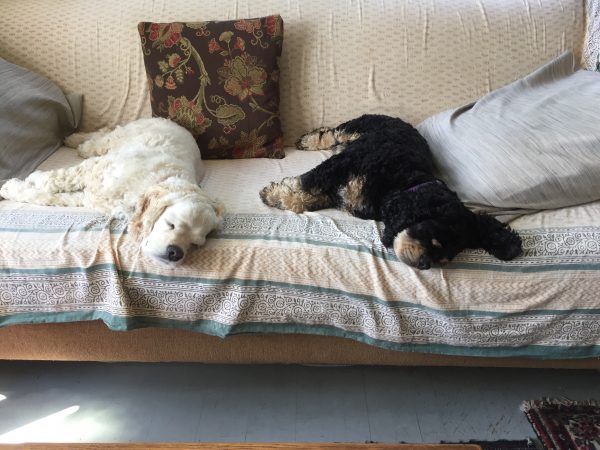 Ruby and Roxie enjoy the comforts of home.

One hundred years later almost all our dogs now carry “people” names. Their elevated status as members of the household is firmly established. They are chosen and accepted as part of the family and named accordingly. Of 92 names on the list, there are only three duplicates. An elkhound and a Samoyed bear the distinctive name of Tasha, and a Dalmatian and an Airedale are both called Ashley. Two males, a golden retriever and a Newfoundland carry the name Sam.  All the rest have very individual names showing their owners acknowledgement of their unique personalities.

Some of the names, mostly of females, are more sophisticated then the simple names of 100 years ago. In addition to Tasha and Ashley, there are Camille, Samantha, Chelsea, Layla, Xantippe, Brittany, Kaitlan, Amber, and Sheena Marie, to name a few.  Male dogs still tend to have more single-syllable macho names such as Duke, Jock, Sam, Dave, Tuck, Chip, Sarge, Mo, Zeb, and Ned. But literary names such as Gulliver, Lilliput, and Lawrence are also found.

Since dogs place no value on their names and will answer to a whistle or whatever they are called, especially if it is followed by a pat or a bone, their names can be seen as reflective of the changing times and society in which they live.