Roberta Wingerson
From The Power of Water: The History of Water Powered Mills in the Monadnock Region,  Historical Society of Cheshire County, 2012

The solid stone walls of the foundation of the large mill built in Munsonville are all that remain of this early industrial site at the outlet of Granite Lake. In 1814, Asa Beard built the Cotton Factory, as it was called, and a boardinghouse for mill workers in what was then a remote section of Nelson to take advantage of the waterpower provided by the dammed up Factory Lake. The boardinghouse is still standing and is now serving as a private residence. These two structures are the heart of what was to become the village of Munsonville. 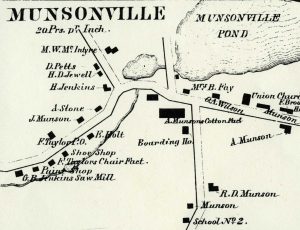 Records show that the mill business was organized under the name of the Nelson Cotton and Woolen Corporation where it appeared on a notice for a meeting of the members to be held on Sept. 18, 1815. The notice was signed by Asa Beard and Amos Heald. The following year, the wool-processing machinery was sold, and, thereafter, it was known as the Cotton Factory.

As workers and families were added to the small community, services for them began to develop nearby. Unlike the earlier settlers of Nelson, those who came to work at the mill were not farmers who produced their own food; they lived in a boardinghouse, worked all day in the mill and needed a place where food and other goods could be bought. Within two years of the mill’s establishment, a store was opened by Oliver Stone (1786-1841) in 1816. It continued under a series of owners until it was destroyed by fire in 1989.

A growing number, though small, of Baptists lived in the area. Since their religious views differed from those of the established Congregational church in Nelson village, they organized their own church in 1818. The members (about twenty) met in the garret of the Cotton Factory storehouse until a new brick church was built the following year by John Breed, Jerry Felt, and Oliver Heald. It was located on Factory Lake (now called Granite Lake) and conveniently used for their service of baptism by immersion. After several years, financial problems caused the original builders to sell the church to the Universalist Church. It was sold again in 1862 to stock company and renamed the Union Hall serving as a community meeting place for the next 29 years. It was the site of dances, shows, meetings of the Granite Lake Grange No. 115 and occasional religious services and Sunday School sessions. It was bought by the United Methodist in 1891 and has remained so for more than 100 years.

Travel was opened up in the early 1830’s, when a highway was built from Keene to Concord through the growing village making both raw materials and markets more accessible for goods produced at the Factory and increasing social interaction for the small community. 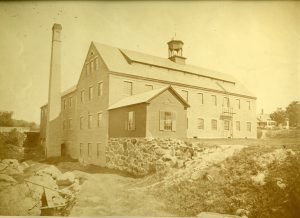 Alvin Munson bought the Cotton Factory in 1843 and added a two story brick mill with “a good basement.” The bricks were locally made at the Henderson’s yard in Nelson. By 1850, the mill, with the addition of new machinery, was producing 55,000 yards of cloth from six hundred and forty spindles and twelve looms employing twenty operators, fifteen of them were women. Capitol stock was reported to be worth $12,000.

In honor of Alvin Munson, the mill owner and first post master, the post office, which had been established in 1837 as the Nelson Factory Village Post Office was renamed the Munsonville Post Office in 1849.

After the financial turmoil of 1857, Munson sold the factory to J. D. and L. J. Colony, father and son, of Keene who modernized the cotton mill and doubled the output by adding a steam engine that produced twice the power of that supplied by water power.  The number of spindles had been increased to 1,064 supplying 28 looms. By 1860, production had increased to 160,000 yards of cloth with twelve men, twenty-four women and four children employed. 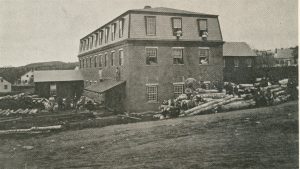 In 1877, a fire damaged the roof of the brick mill. It was rebuilt with a mansard roof effectively adding a third floor, as well as a brick powerhouse, a wooden storage addition, and a dry house. The mill was refitted to manufacture porch chairs. It began by producing 12,000 per year following an earlier tradition established, perhaps, as early as 1838, by Alanson Bingham of Nelson who made “basket” seats and backs from ash splints pounded by hand from peeled ash logs, as did Frederick Taylor beginning in 1854.  Prior to that date Taylor had made wooden-seat chairs. 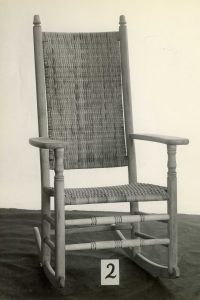 Imported rattan replaced the laboriously fashioned splints but all the other components of the chairs were readily made from available local hardwood sources. Some chairs were given a natural finish, some stained, and some painted. Bright red was the color of all the early chairs, but green later became the standard color. In 1880, Lewis J. Colony sold over 12,000 chairs worth $20,000. Within five years, production had increased to 25,000 to 30,000 chairs sold nationwide. Two chairs had even been ordered for the porch of the White House during the presidency of Grover Cleveland.  After L. J. Colony’s death, the factory was run by his niece, Mrs. Fannie Barrett, during the last two years of production. The L. J. Colony Chair Company ceased operation in 1914.

Demeritt and Fisher bought the factory in 1919 to reestablish the manufacture of rockers, porch and summer chairs of the same high quality as the Colony production.  Fred A. Fisher had worked as a superintendent for the Colony’s. The mill was found to be in very good condition and chair making began quickly. 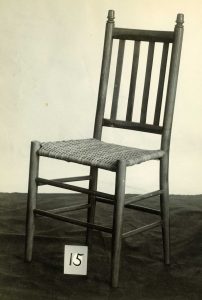 Three years later, twenty different styles of chairs were being made. It is estimated that at that time, 80 percent of the porch chairs made in the United States were manufactured in Cheshire County. The Demeritt-Fisher Company produced chairs there until 1929 when the firm moved to Keene. 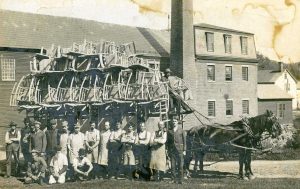 McBean, a lumberman, bought the factory in 1934 to make boxes. The hurricane of 1938 blew off the factory roof ending all further manufacturing. In 1947, the remaining roof on the main building fell, collapsing some of the walls. The tall chimney towered over the ruins until 1963 when the bricks from the 100 foot structure were salvaged for reuse.