The Confabulous Floppy Tolman and Her Confabulations

The Confabulous Floppy Tolman and Her Confabulations 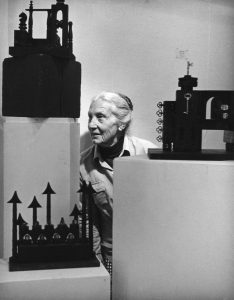 Floppy and her Confabulations, The Sharon Arts Center, 1990s

Do you know Floppy Tolman? If you don’t you might like to. Maybe you saw her in last year’s Tolman Pond Fourth of July Parade, riding in the sidecar of a big, shiny, red Harley Davidson, her silver pony tail streaming behind her. Maybe you have seen her driving her silver Subaru at a leisurely pace down toward Marlborough. Maybe you have heard of her “confabulations,” the whimsical creations made of such practical discards as watch parts and buildings scraps. Or maybe you do know Floppy. If you do you know someone special.

Floppy is old in the way many of us would hope to be: her face is brown and gently coursed with lines that imply a lifetime of laughter and good times, her hair is smooth and long and sheer white tied at her neck in a colorful ribbon, her eyes are bright and blue and expressive.

Floppy is a writer, an artist (though she says she is neither) and once a bookbinder who first came to Nelson in the early 1920s. She and her family spent summers near Tolman Pond, a far cry from what they knew in the New York City suburb of Englewood, New Jersey, where Floppy went to Dwight School. She was known there by her real name, Florence Blackwell. All winter long, she was itching to get back to Nelson, where there were “no starchy maids, no immaculate lawns, no suburban rules of social life.”

It was there at Tolman Pond that she met the Tolman family, Ma and Pa and Newt and Fran and all the other characters. The Tolmans, she says, considered summer people to be a cash crop, which is of course what she was. Even so, their way of life, their stories, the interesting ways of these people captured her. 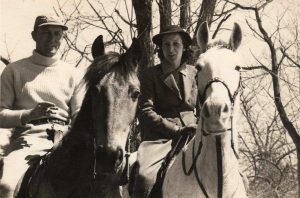 She grew especially fond of Fran Tolman, also an artist. They each had a horse. They first met at the blacksmith shop. He was home for the summer after a year at art school in Boston. “It was Fran who introduced me to the maze of abandoned back roads between our homes. On horseback, we explored the web of grassed-over wooded trails that separated his world of deer tracks, ruins and fox runs from mine of suburban sidewalks and commuter trains.” Floppy wrote in her book, More Spit Than Polish, a memoir of Nelson, which she states at the beginning is “not always strictly factual but in essence is all true.” (The book was published by Yankee Books and is now out of print.)

A few years after she finished her studies at Vassar, Fran and Floppy married, and within a short time they were building their house up behind the farm, “out of reach and out of sight of the old folks but within shouting distance.”

It was to be a studio and a workshop as well as a home, which it still is. One alcove, to the north, is where Floppy works on her art, or sits at her typewriter and spins out her mirthful stories. Another part, to the west, has a big table, where larger projects can be tackled. In the center, around the fireplace, in the light of the bay window, is a circle of comfortable chairs and a couch.

That’s where Floppy likes to sit and visit. She is rarely without a visitor. “Come in!” she cries to the knock on the back door. Floppy likes to tell stories but she also likes to show off her work. The day I visited, last fall, on the sill of the bay window were three “confabulations,” indescribable creations that look variously like hard-edged sandcastles or idiosyncratic weathervanes or little, silent machines, poised to run. 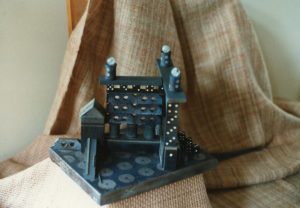 Over the years, Floppy has made dozens of these, using practically everything under the sun to fashion them: clock gears, chess pieces, playing cards, tongue depressors, cut-outs of Alice and the Mad Hatter and their ilk, clothes pins, thread spools and wool spindles, buttons, beads, parts of a piano, glass marbles, lamp finals, ends of boards (Floppy likes to stop at construction sites and scavenge) skeleton keys, even feathers, often her crowing touch. 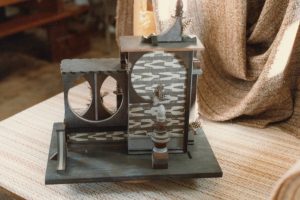 She makes them at her big table. “I just sit down and look at all the objects and tinker with them and put them together and see what they look like until I’m happy with it.” And then she paints the configuration, neutral colors spritzed whimsically with brighter colors. What it all means, she doesn’t know. It’s a bit like the way she views life: fun and colorful and interesting and confounding, all in the one little creation.

She says she got started on them when John Colony closed the woolen mill over in Harrisville. “There were bags and bags, oh, big as this house almost, of these things, little scraps of wood and spools and things. I couldn’t stand to see them go to waste. I figured I could do something with them?”

Over the years, Floppy has sold her inventions, here and there. She says she doesn’t know how many she had made, but she has kept track of any that she has parted with. Last summer, Floppy had an art show in the Old Schoolhouse where, she says, she sold “quite a batch of them.” The quirky inventions sold briskly for the arbitrary price of $500. “I didn’t know what to charge. I just put them out there. The person who bought the first two didn’t ask me how much they were, she said, ‘I’ll buy two at $500 a piece.’ So I just put $500 on all of them and they went like lightning.”

Floppy may not sell any more. Her arthritis makes moving around a lot harder than it used to be. The supply is down and the grandchildren have their favorites picked out. “I may not do any more and if I don’t, that’s OK. I’ve sold all I really want to sell and I really don’t have any more to sell.”

Floppy muses that this is the first time she has ever made any money on anything. “Can you imagine?” she asks, her bright blue eyes full of amazement. Floppy is in her nineties now, and she has seen so much. Little gets by her. Still, it seems to surprise her that she has made her way through life, without having earned a living. 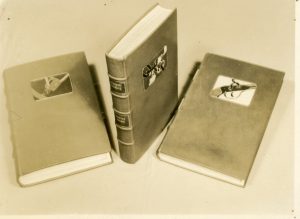 After Floppy graduated from college, she started out as a bookbinder in New York City. She learned the art and still has some gorgeous leather bound books that she crafted in the New York shop. The titles are stamped in gold and the edges are trimmed to perfection, the bindings crowned in ribbon. But she was just an apprentice, never paid for her work. “In those days it wasn’t automatic for a woman to get a job. I wasn’t going to go out and get a job as a stenographer, which would be pretty damn boring. We didn’t learn to make a living in college. We had a good time, mostly.”

Floppy says she went to a reunion, once. “That was the end of that!” She was in the class of 1924 and she knows that if she did attend, she would likely be honored as among the oldest graduates. “The oldest! I never want to be famous for just being the oldest There’s no future in that!”

The source of so many of her stories, Ma and Pa Tolman, are long gone and even the infamous Newt is gone. Fran died in 1967. (Floppy still sells copies of his famous block prints, depicting scenes at Tolman Pond – the Portland Fancy, chopping wood, the Saturday night bath.) 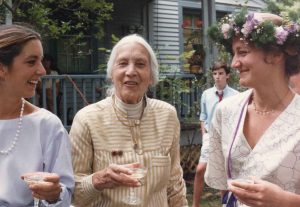 With granddaughters Bee and Stacia, getting a kick out of something!

She has been on her own since then but, never alone, with her son Barry and daughter-in-law Karen just down the hill, in the old farmhouse, and her grandchildren in and out all the time. Presently, granddaughter Stacia and her husband, Joe Anderson, live not only within shouting distance but within sight and they share the phone, so they are close at hand, should she ever need anything.

They all still whirl around her, rushing here and rushing there. Floppy’s life is like the calm in the center of it all. She rises early and her days are busy and full of the richness of life on Tolman Pond. But they are peaceful. “I’m one of the people who’ve had a very good life, that’s all I can say. I’ve just been lucky. I’ve made some terrible mistakes that I wouldn’t dream of telling anybody about,” she says, her mischievous grin returning. She laughs. “I’ll tell stories about other people! And I’ll draaaaaamatize!” 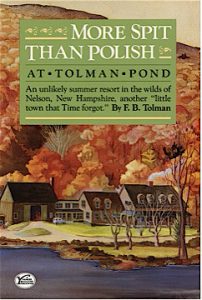 It’s what she does best, her stories. If you can find a copy, be sure to read More Spit Than Polish. The stories are lovely and they evoke that earlier time here in Nelson, which, we are lucky to realize is not altogether lost, though some of its characters are.

Floppy is working on another book. “I’m trying to finish it. The deadline that I’ve got is that I hate to die before I finish what I’m working on,” she says, her humor ever present. “It wouldn’t be good for anything unless I finish it.” It’s that old thriftiness, rising up again. An unfinished manuscript would be more than her heart could bear, more than our hearts could bear.

Floppy cannot imagine what her life would have been like if she had remained in the world of “suburban sidewalks and commuter trains” of Englewood, New Jersey. She looks out her window, down the hill past the rough sheep pasture, to the pond. She cannot even entertain the question. “If I had ever had a romantic picture of the quaint beauty of rural life, I might have been disillusioned by the slipshod reality,” she wrote of her early days in Nelson. “Perversely, I became attached to it.”

For this, we can all be grateful.