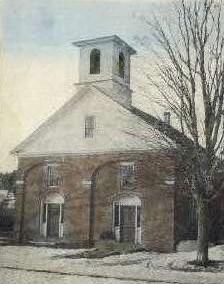 In the early development of manufacturing, areas that afforded the potential for water power were prime locations for community growth. In 1814, the Cotton Factory was built in a remote section of Nelson to take advantage of the water power from the outflow of the dammed Factory Lake, now known as Granite Lake.  A community began to develop around the factory. A small number of the residents here were Baptists who met for services in the garret of the Cotton Factory.  Holding beliefs that differed from the established Congregational Church in the village of Nelson, they decided to build their own church.

In 1819 John Breed, Jerry Felt, and Oliver Heald, all Baptists, constructed a new brick church on the shore of Factory Lake conveniently located for their service of baptism by immersion.  It is reported that even if there was ice on the Lake, it would be broken for baptisms if needed.

After several years, financial problems caused the original builders to sell the church to the Universalist Church. It was again sold in 1862 to a stock company and was known as Union Hall for the next 29 years. The building served as a community meeting place and was the site of dances, shows, and occasional religious services and Sunday school sessions. There is an old framed announcement near the clerk’s desk in the Nelson Town Office advertising a “Fancy Dress Ball” to be held at the Union Hall on April 5, 1871 that attests to social activities there. It also was the meeting place of the Granite Lake Grange No. 115 for several years. 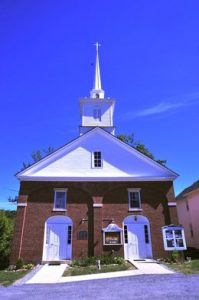 In 1891 the building was bought by the United Methodist Church and has remained so for more than 125 years.  It was renamed the Chapel-by-the-Lake in 1943 by Rev. Fay Gemmel, the pastor at that time. In 1938 during the depression a local Nelson artist, Albert Duvall Quigley who was employed by the WPA, painted a mural on three walls of the Chapel.  It is remembered by some of the older town residents as portraying life in Nelson in the early days.  The mural was painted over with no photographs or drawings made to document Quigley’s work.  According to Bill Steiniger who edited a history of the Chapel in 2017, this happened in 1958.

A major renovation of the church building was taken in 1972. After the long life of the building with only a bell tower,  a steeple was added in 1995.  Today the building remains a community center in addition to the weekly religious services with many activities sponsored by the church.

In the early development of manufacturing, areas that afforded the potential for water power were prime locations for community growth. In 1814, the Cotton Factory was built in a remote section of Nelson to take advantage of the water power from the outflow of the dammed Factory Lake, now known as Granite Lake.  A community began to develop around [...]

A possible resemblance to a service in the Nelson Meetinghouse. The Second Meetinghouse was built in 1786 when the town, then called Packersfield, replaced its original Meetinghouse with a magnificent one modeled on one in Wilton. The town of Hancock, in turn, modeled their new meetinghouse on Packersfield’s. It was forty-five by sixty feet and twenty-eight feet tall at [...]

The original charter of Monadnock Number Six stipulated founding a successful town in accordance with the king’s requirements. The charter contained requirements to establish and support of religion and education. Three of the grantors’ shares in the town, a total of six one hundred acre lots, were reserved  “free from charge, one for the first settled minister one for [...]

The Reverend Jacob Foster served the town of Packersfield for ten years from 1781 to 1791. During that time twenty-seven families joined the church. We do not have census data that exactly match the years Foster served, but the population of Packersfield in 1783 was recorded as 511 and in 1790 as 721.  The census of 1790 listed [...]

Editors note:  This is the third and final article in a series relating the founding of the first ministry in Packersfield.  The first detailed the many efforts to acquire a minister for a small, remote community. Several ministers came for trial periods and several offers of employment were made before Jacob Foster accepted the call. The second discussed Foster’s [...]