Peter Chandler was born in Andover, Massachusetts in 1755 and moved to Packersfield with his wife, May, from Wilton after service in the Revolution. His pension application states that he enlisted in 1775 and served until May of 1780. He “received a wound through the body by a musket ball in the year 1776.” The Chandlers bought the property in 1782, but probably came a few years later; the road to the place was laid out in 1786. They had eight children on their farm above Spoonwood Pond. Five of Peter and May’s children died young. Hannah (born 1792) married John Ingalls in 1811. Three years later at age of 59, Peter Chandler transferred the farm to his son-in-law, John Ingalls, in return for support for life. The arrangement did not last long. The family restructured its finances with Peter’s son, Elijah, a carpenter from Hancock, buying the title in 1816.

John Chandler died in 1819 and is buried with five of his children in the Village Cemetery. The family probably continued on the place until John and May’s daughter, Priscilla (Struthers: “bed ridden and didn’t speak for years”) died in 1830. In any case the family left by 1834 when Elijah, now living in Greenfield and a housewright, sold the 100-acre farm to Oliver Stone. Stone owned land nearby and may have run sheep on the property. The house was abandoned then. 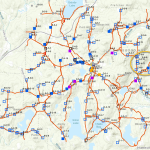