Noah Hardy built the cape cod style house on 100 acres of land here in 1785.  He came from Hollis, New Hampshire. His last enlistment (1780) was from Packersfield. It is not clear where he might have resided prior to 1785. He sold a small piece on the brook to Thomas K. Breed where that man established a fulling mill. He sold the balance in 1797 and moved to D-7-7 where he established a cooperage. The next resident was Nathan Fay who was their briefly (1797-1799) before it was purchased by John Burnap another war veteran from Reading, Massachusetts. He and his wife, Mary Haywood, had six children. Son, Eli ,had preceded them in 1795 (C-4-17) and probably only Amos moved to Packersfield with them. (John also had a farm in the Northwest Quarter.) John died in 1815 aged 71 and was succeeded on the farm by his son, Pious Upton Burnap. Pious died at age 53 and the farm passed to his son, Upton. Upton Burnap proceeded to buy surrounding farms at a prodigious pace. He bought the Felt, Lawrence, Barker and Hunting farms. The family moved to Keene where Upton died in 1854. By the time of his death his farm totaled some 500 acres.  His widow, Harriet, sold the place to Henry O’Dowd in 1862. O’Dowd lived there until 1874. Leander Patrick and his wife, Mary lived there from about 1884 to 1939. The small, white cape is one of the oldest in Nelson. 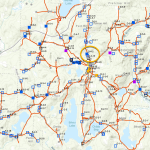