Jesse and Lydia (Parker) Wright moved to Packersfield from Woburn, Massachusetts in 1780. Their initial lot was 104 acres, the common size for an uncleared lot. 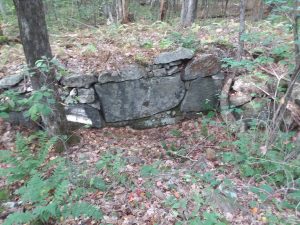 That year they built a house at E-2-1. There were here 13 years before they acquired additional property to the south and built a much larger house here. The Wrights had 16 children.  By the time they moved to Rodman, New York in 1805, the farm had grown to almost 190 acres.  Josiah Fletcher and Caleb Abbott owned the place from 1805-1810 when they sold to Nathaniel Upton. In 1814 he sold to brothers Joseph and Benjamin Blood of Tyngsboro, Massachusetts. Joseph and Hannah moved into the Wright house with their four children. They enlarged the farm a bit more. Blood Hill is named for this family.

Joseph died in 1839 and Hannah in 1841. Their daughters Hannah and Rhoda Blood, both single women,  continued to live on the place until they moved to Nelson Village in 1853. Ownership reverted to Benjamin Blood. The final inhabitant was probably Jehiel White who lived there from 1853 until he moved to Marlborough in about 1860. 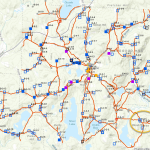