Rutland, Massachusetts provided many of the early settlers of this part of Packersfield. James Banks of Rutland built the place with its neighboring barn  in about 1780. His son, William, succeeded in 1807.

Deacon Reuben Phillips and his wife Rebecca bought the place in 1836. They raised 14 children there.

Iron water pipe near the foundation is evidence of later improvements. This probably connected the well, in the swale between the barn and the house, with a hand pump in the kitchen.

The Reverend Daniel Clark (1895) was probably the last resident. It was sold to the City of Keene to protect its water supply in 1901. 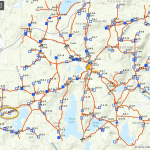