As early as 20,000 years ago, small groups of hunter-gatherers began to enter the pristine environment of this continent.They followed the wild game on which they depended across the ancient exposed bridge of land into the new world. They eventually expanded from the Arctic to the very tip of South America and moved eastward toward the shores of the Atlantic. Over the last hundred years, archaeological excavations have revealed some of their wandering, their hunting sites, their more extended camp sites and later their villages. All of this growth and social development occurred before the arrival of another group of people on the opposite shore that followed their need to find new territory to increase their food supply.

Seafaring men from England, France, Portugal and Spain in the late 1500’s found that the long and difficult voyages along the North Atlantic were well worth the great shiploads of dried cod and later furs they returned with. The Vikings also came and tried to gain a foothold in North America and so this new land became known to the Europeans.They brought with them disease to which the native population had no natural immunity causing a great number of deaths. By the time that the colonists arrived to settle here many villages were near empty. 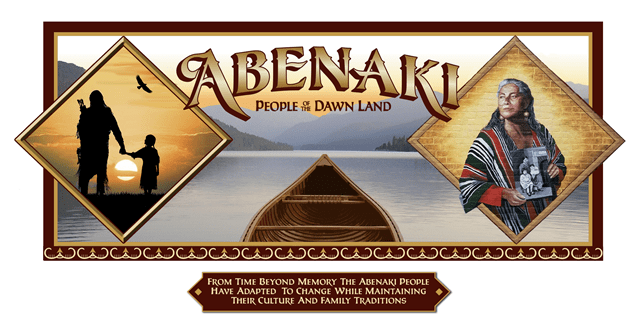 In the Monadnock region the native people the colonists encountered were called the Abenaki. They were here long before the settlers arrived but there is little mention of them in the written word of the new arrivals. This poses questions about their small numbers. Yet some of their descendants still live among us with pride in their historic past. They were recognized by the Abenaki mural as part of Keene’s history in a new series of historical murals painted on the outer walls of buildings in Keene. At the 2002 Conference on Abenaki History at Franklin Pierce College, David Stewart Smith, an ethno-historian and a Pennacook Abenaki, gave a summary of Abenaki settlement patterns in the Monadnock area.

He stated that prolonged severe cold in the 14th century so reduced the corn yield that it forced the Abenaki to move to agricultural areas in southern New England. Those who chose to remain here had to return to a hunting and gathering way of life. A second factor was the spread of disease in the 16th and 17th century from European contact that may have led to the death of as many as 90% of the Abenaki people. They have, however, left traces of their presence that can be seen today. There are three locations in the Connecticut River valley that have important petroglyphs, symbols carved into rock surfaces by native people, and a unique fish trap that can be seen in the Ashuelot River. The older sites of early Native Americans occupation are more difficult to find because they lay hidden below the present ground surface but the construction of the new Middle School in Keene led to the discovery of the site of Paleo-Indians who hunted here south of the melting glacier.

Several years ago, I was asked to represent New Hampshire on the board of ARARA (American Rock Art Research Association) to report on Native American rock art in this state since New Hampshire was listed as having none. This led to a hunt to find any examples of petroglyphs in the literature and field trips to see them. Unlike the South West, there are few examples to be seen in the state. A local one, the “Bow and Arrow” site is in Surry and two petroglyphs are across the river in Vermont, but the Abenaki didn’t observe state lines, nor will we. We are fortunate to have three local sites that are well-documented as made by Native Americans. There are few others that were investigated and determined to have been made by non-natives as later copies of Indian rock art. The three sites in the Connecticut River valley that have been reported in early literature will be described in the following text.

THE BOW AND ARROW SITE

This petroglyph consisting of a drawn bow with an arrow is pecked into the exposed surface of glacially smoothed granite bedrock on the top of a hill overlooking Route 12 north of Keene. The cross-section of the lines of the glyph are U-shaped showing that they were pecked with a stone tool. The bow measures three feet across. It was reported to have been known to early settlers. There are also some straight lines with V-shaped cross sections adjacent to bow and arrow that were cut into the stone surface with a steel tool that indicate a later date with unknown significance.

According to Samuel Wadsworth in Wadsworth Notes, 1935, the arrow points to Central Square in Keene (which may not have been there when the glyph was made) and to Mount Monadnock which was. He reports that William P. Mason , neighboring land owner, cut a similar figure and several others in the vicinity 25 rods to the southwest with an axe head. All have V-shaped cross sections. This petroglyph lies in a protected 285 acre tract of land called the Indian Arrow Head Forest donated by Ruth and James Ewing. 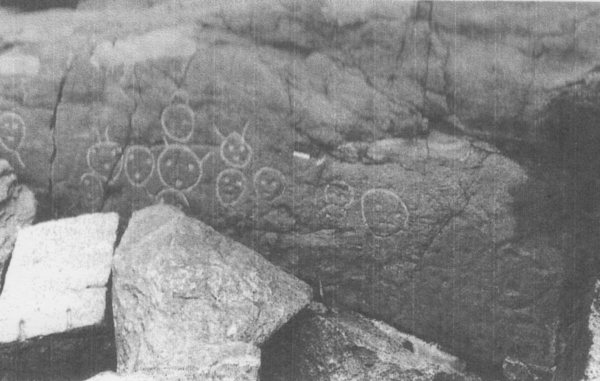 This site consists of two clusters on the west bank of the Connecticut River about 60 feet south from the Vilas Bridge (Bellows Falls, VT) at an elevation of 240 to 260 feet.The glyphs are carved into two massive outcrops of granite above water level. Each cluster has several glyphs of heads that have been studied and counted by a number of researchers over the years. Each one has a different count of the number of heads found beginning in 1857 with Schoolcraft. Part of the problem has been the deposition of riprap and cinders over the outcrop and erosion by spring floods changing the visibility of the heads. Some additional heads can be seen disappearing below slabs of rock fill that have not been counted.

History has not been kind to these symbols made by indigenous people to express the importance of their visit to the power of the great fall of the river as well as the fish it provided. In 1931, the Daughters of the American Revolution (DAR) hired an artist to improve the visibility of the “Indian Heads” by enlarging the width of the lines of the glyphs so they could be better viewed from the Vilas bridge. For the same reason, they were painted yellow in 1961; both were bad decisions made by insensitive people.

A more recent detailed report was made by Edward Lenik, an archaeologist and expert in rock art, in 2002 and I will use his counts and interpretations. On the north panel, 10 heads were counted including one with two rays or lines coming from the top of his head and on the south panel there were twenty-four heads, three with two rays each and one with one ray. Lenik believes that the rays represent shaman and that the heads carved into the ledges at the Great Falls are an attempt to make contact and gain access to the spiritual power of the Great Falls. 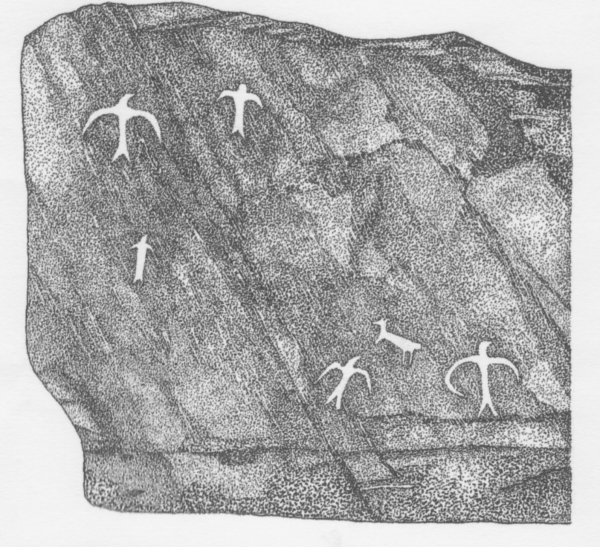 This petroglyph group found on the shore of the West River was first mentioned in 1794 by Samuel Williams in The Natural History of Vermont. The glyphs of four birds called thunderbirds and dog or wolf were pecked into a vertical rock panel located at the junction of the West River and the Connecticut River. They were photographed and recorded and visible until a dam built across the Connecticut River at Vernon, New Hampshire raised the water level and covered them.

Thunderbirds are believed to have spiritual power and were protective of humans from the Great Horned Serpent of the underworld, a legend among the Algonkian speaking people of the Northeast. Lenik concludes that they may represent a shaman’s attempt to communicate with these spiritual beings and they may mark a sacred place in the river. It has been recorded that Indian artifacts were found on the land behind the glyphs.

At low water, the V-shaped fish trap of aligned boulders can easily be seen from the shore of the Ashuelot River in Swanzey. Local tradition attributes its building to the Abenaki as a way to increase the catch of salmon and other anadromous fish. No other stone structure of Indian construction has ever been found in New England. Archaeological excavations along the banks of the river have recovered artifacts that date to the Late Archaic (3000 to 4000 B.P) and Late Woodland (c. 500 B.P) periods.Stone tools and ceramic shards were recovered as well as burned deer and turtle bones showing they were part of their diet.

[MORE ABOUT THE FISH TRAP – PDF]

The Paleo-Indian period begins with the retreat the glacier about 13,000 B.P. It is known for small bands of hunters who hunted big game animals moving in the environment as their quarry moved. As the glacier moved north, great amounts of water flowed from the melting ice making lakes in the lower valleys. Tenant swamp is the remnant of a lake that would have been present when the Paleo-Indians camped there. Archaeologist, Robert Goodby, excavated the site when construction for the Keene Middle School uncovered evidence of Indian occupation there. Stone tools consistent with those of Paleo-Indians were found although the essential and well knapped fluted projectile point that marks their presence was not recovered. Burned bone fragments of caribou bones were recovered. Radiocarbon dating of these bones showed they were from 12,570 and 12,660 years ago.

At this time there is no evidence of native settlement or even activity in what we now call Nelson. Someday something may be discovered – or not. Meanwhile, knowing what was going on in the larger surrounding area helps us think about the possibilities.