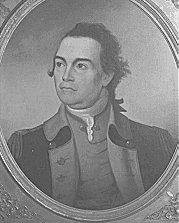 Imagine driving back to Nelson from Keene along Route 9 and coming to a store called the West Nelson Country Store. Today that’s the Sullivan Country Store. But for two fraudulent signatures on a petition in 1786, East Sullivan might be in Nelson today.

Nelson, called Packersfield prior to 1814, has lost three large chunks of itself to the formation of new towns since its incorporation in 1774. This is the story of the first of these: Sullivan. Towns in New Hampshire granted by the Masonian Proprietors consisted of lines drawn on maps in Portsmouth with little reference to the geography except for major rivers and the existence of previously granted places. History has proved these divisions unstable and many New Hampshire towns have been formed subsequently from pieces of older towns. In Cheshire County examples of such new towns are Troy, Sullivan, Roxbury and Harrisville. Three times between 1786 and 1870, the legislature determined that citizens would be best served by the creation of new towns formed from significant parts of Nelson and adjoining towns.

In 1784 Packersfield received a petition from certain residents of Keene, Gilsum, Stoddard and Packersfield (allegedly) requesting that those towns agree to “set off” parts of their towns to form a new town to be called Orange. Packersfield voted not to “set off” the five square mile section of the town. Why would they? There were no roads, no homes and no residents in the part of town covered by the petition but there were taxes being collected. Denied, the petitioners appealed to the General Court (the legislature.) The petition read in part:

“Humbly shew your Petitioners, the Subscribers, Inhabitants of the Towns of Keene, Packersfield, Gilsom and Stoddard. That they live remote from the centre of their respective Towns and by reason of distance and bad roads are deprived of town privileges – That they cannot enjoy these conveniences of public worship – That some of their duties as members of their several towns are by their situation very burdensome – That they are encouraged to hope that no objections will be made to their being thus incorporated unless by the town of Gilsom, and that these objections may be easily obviated.”

The petitioners’ argument was that they lived distant from the centers of their towns, paid heavy taxes and were connected by poor roads which cut them off from public services including public worship. It was true; there were no roads in that part of Packersfield and the landowners (the Packer family from Greenland, New Hampshire) were obliged to pay taxes. The Packers were not signatories to the petition and Packersfield did have an objection not “easily obviated.”

The proposal that sought to remove the northwest section of Packersfield, two miles by two and a half miles – more than one eighth of the town, was signed by Oliver Carter and Grindal Keith who represented themselves as living in the part of Packersfield that would become Sullivan. The irony is that no one lived there, certainly not Oliver and Grindal. 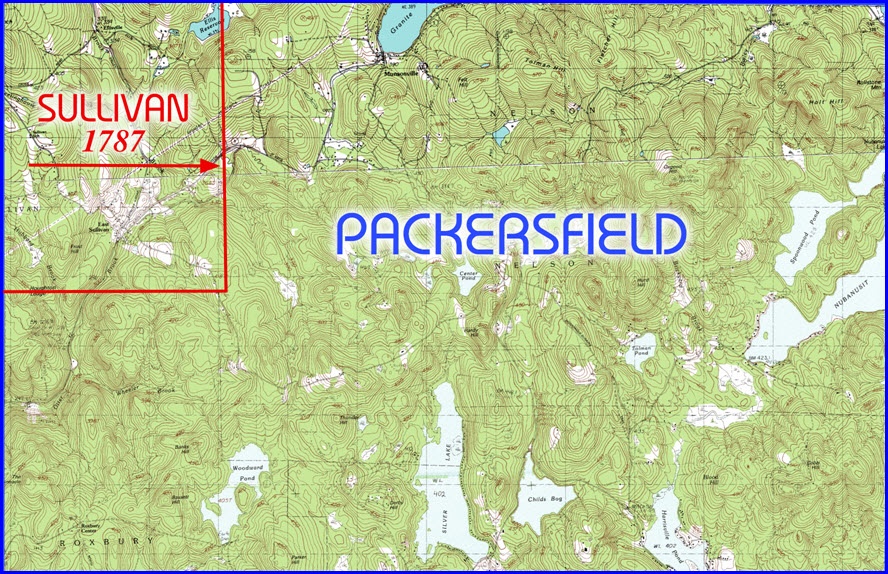 Virtually the whole northwest quarter of Packersfield – today’s Munsonville – had been owned by the Packer family since 1753 and remained in their hands. When Sheriff Thomas Packer died in 1771 he had sold only a few hundred acres of his Packersfield holdings and still owned 5,800. Further sales were held up by a struggle over his estate that didn’t end until late 1779. Having regained the estate, his son, Thomas, sold a few more hundred acres before he died in 1790. His sons, Thomas and George and his widow, Molly, sold the balance of their holdings in the two decades that followed. We don’t know why the Packers held on to their land once they’d recovered their inheritance, but we do know there was no one living in the northwest corner of Packersfield in 1786 unless they were squatters.

If Oliver Carter and Grindal Keith lived in what would become Sullivan, they lived near one another on today’s Boulder Road in what was then Stoddard. Oliver Carter seems to never have truly lived in Sullivan. Born in Lancaster, Massachusetts and married to Emily Harrington of that town, he had eight children, all born in Lancaster. He may have intended to move to the Stoddard part of Sullivan apparently living for a while with his brother Elijah and buying a farm there in 1783. In any case he returned to Lancaster in time for the 1790 census and died there in 1842. Grindal Keith, born in Uxbridge, Massachusetts, moved to Stoddard (Sullivan) in 1783 and lived with his brother-in-law, Nathan Bolster on what is now Boulder Road. The next year he bought an adjoining piece of land and moved his family there. He and his wife had five children, the first two born in Stoddard. He lived there about ten years before moving to Rockingham, Vermont.

Packersfield seems to have been of two minds about the new town. They seem to have turned down the initial request; then accepted it; then protested vigorously at the very end of the process. We know of this sequence from Town Papers of New Hampshire Volume XIII which contains the remonstrance to the General Court by Packersfield in December 1786 as well as their earlier (March 29, 1786) acceptance, agreeing, “providing the other parts jenly and severly join together. Consider Osgood and Amos child selectmen.” The final word from Packersfield put this acceptance down to “inadvertency.”

The whole sequence is laid out by Packersfield selectmen in a petition to the General Court on December 1, 1786. The argument was laid out as follows:

The petition for the new town was not legitimate because the two signatories representing themselves as being from Packersfield are not. In fact there are no residents in that part of the town. The town of Packersfield “inadvertently” agreed to a petition to form a new town as long as the other three towns involved also agreed and was surprised to find that the petition was subsequently presented to the Legislature. The effect on Packersfield would be to frustrate its attempt to build a new house of worship. (In fact the erection of a new meetinghouse in Packersfield was at a critical stage.) It finished with a plea “that your honours in your known Wisdom Will not Erect a New Town on the ruins of older ones.”

The General Court appointed a committee of two men to review the petition and recommend whether a new town should be formed. The committee found that Sullivan was surrounded by mountains and the pieces were not easily accessible by the towns that would make up Sullivan. The committee rendered its report on the 24th of September recommending approval and the bill creating Sullivan was enacted and signed into law by New Hampshire’s President, John Sullivan, three days later. The opening sentences of Sullivan’s charter are a little ironic in light of Packersfield’s objection:

“Whereas a petition hath been preferred to the General Court by part of the towns of Keene, Packersfield, Stoddard and Gilsum in the County of Cheshire, praying to be incorporated into a town by the name of Sullivan, of which due notice has been given and no reasonable objection appearing against it:…”

[see full text at the end of this article]

Some two hundred and twenty-five years later it is difficult to determine the motives of those involved. On the surface of it, Packersfield had little to lose; there were no people living in the Packersfield part of East Sullivan. Still the Packer family was paying taxes on 3,200 acres of wild land and required no town services. Packersfield lost tax revenue on those acres of land at the very time they were raising a considerable amount of money to build their new meetinghouse. In 1785 the town had petitioned the legislature for a special tax on land at the rate of one penny per acre for three years. A year’s worth of lost taxes on the Sullivan land cost Packersfield over thirteen pounds – a substantial hole in the complicated financing plan for the building. This was in addition to the contribution to usual town taxes that the holding represented.

Sullivan, of course, stood to gain the normal taxes on wild land, but access to waterpower for the new town was probably a more important consideration. The only significant potential for waterpower sites in the new town of Sullivan was along Otter Brook in what had been Packersfield. The mill on Otter Brook at East Sullivan was built by Nathaniel Mason in 1797. The waterpower was to be further developed in the years ahead.

The ultimate irony of the story is the fact that Packersfield had petitioned the General Court to be renamed Sullivan in 1778. Just nine years later the undeveloped land in “Packer’s Quarter” became part of a new town of the same name. And Sullivan had petitioned to be named “Orange.” 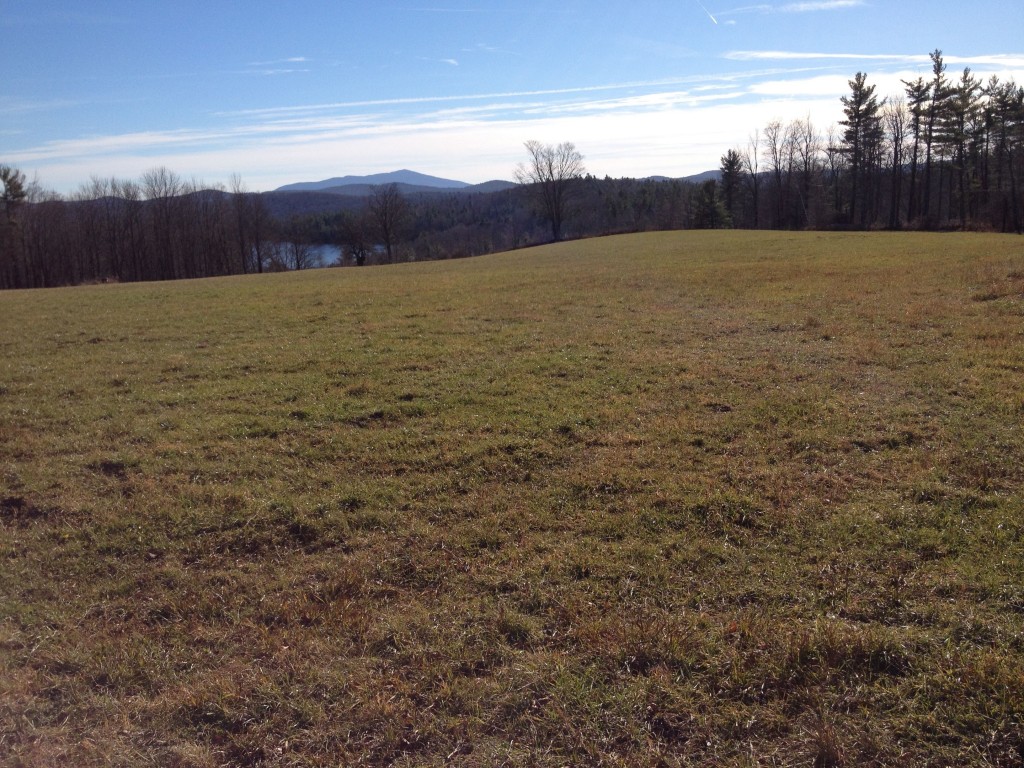 View from the homestead in Stoddard where Oliver Carter lived for a time.
The view is Bolster Pond and what was formerly Packersfield to the south.

“To the Honorable Senate and House of Representatives for the State of New Hampshire in General Court convened at Portsmouth December A.D. 1786

Although at a meeting of the Inhabitants of the Town of Packersfield in the month of March A.D. 1784 There was a Petition Signed by a Number of the Inhabitants of the Towns of Gilsom, Stoddard and keen [Keene] Preferd in Said meeting praying that the Town of Packersfield would vote off a Certain part of Packersfield to be Erected into a Town Said part to Contain Two Miles East and west and Two miles and a half North and South which would Contain one Eighth Part of Said Packersfield and from the reasons offered at that Time and through inadvertency of the People the prayer of Said Petition was granted upon Conditions that all the respective Towns Concerned ware mutually agreed thereto (Sence Which Period) not supposing that the petitioners refered to would obtain their request before the General assembly) have proceeded to agree upon a Center for Erecting a meeting House and have made provision for the Same therefore if the Prayer to the Inhabitants of the Town of Gilsom and others Preferd to the General Court Should be Granted it will be a means of removing the Present Center and frustrate our Design in Building a House for Public Worship and thro the Town into the uttermost Confusion imaginable and as we look upon your Honours as Guardians of the State your Petitioners flatter themselves that your honours in your known Wisdom Will not Erect a New Town on the ruins of older ones: therefore your Petitioners pray that the prayer of the petition referd to may not be granted.

Selectmen of the Town of Packersfield