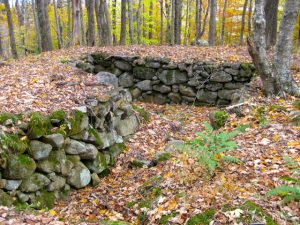 There are foundations for two houses on this site within a few hundred feet of each other. They are what remains of homes built by Stephen Osborn beginning in 1799. Stephen Osborn was born in 1771 and married Rachael Baker of Marlborough in 1792. In approximately 1799 they moved to Packersfield becoming members of the church in 1800. They first appear in the town’s tax rolls in 1808 owning a horse, two cows and an ox. The first built a house and barn to which they added a number of attached structures. There is a well on the site.

Osborn took formal title to the place in 1815. That is the year he probably constructed the mill at F-5-12.  In 1827 he brought his son, Cyrus, who had moved to Mount Holly, Vermont, into partnership in the mill. It is likely that Cyrus moved his family into this house and that Stephen built a new home where the cellar hole is today a few hundred feet to the southeast of the first house the same year. The new house had its own well, a beautiful piece of stonework approximately 20 feet deep.

In 1838 the father-son partnership was replaced by a partnership with Stephen’s son-in-law, Nathaniel Davis, who lived on this place until the death of Stephen in 1844. Rachael herself died in 1846 and Nathaniel and Mary moved to the Davis place abandoning the earlier homestead as a primary residence. It is likely that the first house served as a substantial outbuilding for the main home perhaps into the early 20th century.

Stephen and his wife Rachael were succeeded on the place by his son-in-law, Nathaniel Davis and Stephen’s oldest daughter, Mary. Stephen started as a modest farmer probably leasing the property from 1799 until his purchase in 1815. He built the mill on Bailey Brook, a modest stream with a substantial waterfall. Stephen built a mill that used the modest power available to turn handles for common hand tools. 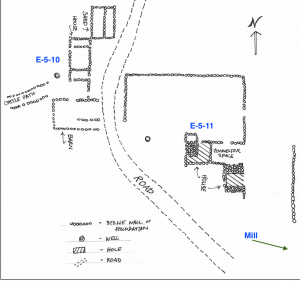 When Stephen died in 1844, his estate inventory reflected the contents of a wood working mill and the household of a prosperous man. When Nathaniel Davis died in 1866, the inventory was that of a person of very modest means and the woodworking tools were gone.  The mill had failed. Mary live on the place for a few years.

In 1875 the place was purchased by Parker and Elizabeth Hart from Hancock, Massachusetts. They seem to have used it as a summer home. It has been called the “Hart Place” ever since. In 1901 they sold it to Louis Cabot as Boston industrialist who accumulated thousands of acres in Nelson. The road to the site was closed by the town in 1922. The buildings were probably gone several years earlier.

Grave sites of Stephen, Rachel, and one of their grandsons, Dalphon 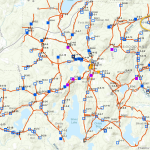