The cross-stitched sampler that Sophia Griffin created as an eleven-year-old girl in Packersfield in 1801 has come home to Nelson.  This is a story of an old Nelson family; interest in family heritage and local history, the marvel of communication that the Internet can be and the generosity of Nancy and Ray Foster. 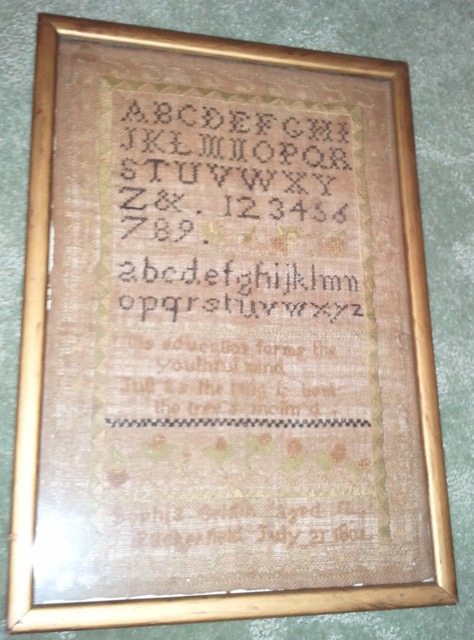 A sampler is an early piece of needlework stitched, or wrought by a young girl in school with silk thread on a linen background as a demonstration of accomplishment. Samplers can run the gamut in quality and complexity. The first attempt at making a sampler usually contained only alphabets, numbers, name, date, and sometimes a small amount of decorative stitching. Sophia Griffin’s sampler is a good example of a simple sampler done at a young age.

In the spring of 2012 Nancy and Ray Foster of St. Petersburg, Florida were doing a much needed weeding out of long stored and treasured things.  Among them was a sampler that had been given to Nancy’s mother, Doris Parrish, by her longtime friend, Carolyn (Peachy) McGlinty in the early 1970’s.  The sampler came with a written history that had come from a family bible. Nancy recalls: “ I cannot recall how the sampler was transported to Woburn, but once it was in Woburn, my Mom proudly displayed it on her dining room wall. At that time, there was never any discussion as to where Packersfield was or who the little girl may have been, only that it had more sentimental value than historic.”

In 1977, the Fosters and Nancy’s mother moved to St. Petersburg Florida and Sophia Griffin’s sampler went with them.  The sampler hung on the wall until Doris Parish died in 1999. Then it was lovingly packed in a flowery cotton pillowcase and moved twice more, still stored away in its pillowcase.

In the spring of 2012 Nancy and Ray decided they really had to clean out some of their collection of “things” kept and stored carefully for years. The sampler came out and was taken to an auctioneer to be valued. Nancy was fascinated by it and determined to find out who had made it. It was difficult to read the stitched letters of the time-faded, cross-stitch and through the glass of the frame, but the sampler seemed to have been cross-stitched by Sylvia Griffith of Packerfield in 1801 when she was seventeen. A Google search suggested that Packerfield might actually be Packersfield and that led Nancy to the Nelson Town web site.  There she saw Susan Hansel’s article on preserving old records and read some of Rick Church’s articles on Nelson’s early history.  Both contained the word Packersfield. (Hence the Google “hit.”) Email contact was made with Susan through the good offices of our web master, Gordon Peery. Susan got Bert Wingerson and Rick Church involved.  Nancy sent a picture of the sampler and other names from an old family bible including that of the Parker family.

A quick check of Parke Struther’s, A History of Nelson, reveals no young girl by that name, but a closer examination of the stitching suggested that the stitcher was actually Sophia Griffin.  Struther’s genealogical information documents a daughter, Sophia Griffin, the fourth of twelve children born to Samuel and Sophia Griffin in Packersfield in 1789 making her 11 not 17 in the year the sampler was made. With this information, Nancy Foster did her own research using Ancestry.Com on Sophia Griffin and added more to our understanding of the sampler’s creator.

Sophia’s parents were both Packersfield people. Her father had come as early as 1779 and married Sophia Foster, the daughter of Packersfield’s first minister. They bought the Amos Skinner farm at the top of Dixon Hill.  Sophia made her sampler there in 1801. In 1814 she married Josiah Parker JR and moved to his farm undoubtedly taking her sampler with her. The Parker Farm cellar hole is a quarter mile up an old road that runs north through the woods off Apple Hill Road between the current homes of Priscilla Williams and Dorothy Iselin. Sophia and Josiah raised eleven children in that house.  Josiah died in 1839 and his son, also Josiah, took over the farm increasing the acreage. The farm was abandoned at about the time of Sophia’s death in 1866. Probably the sampler moved on with one of her daughters or grand-daughters of whom there were many.

With the origin of the sampler established, its financial value increased substantially but the sentimental value increased even more. Nancy and Ray Foster felt “Sophia” should come home. On September 26th, the Fosters arrived in Nelson and donated Sophia’s sampler to the town. Bert Wingerson and Susan Hansel played host and led them on a tour that included Sophia Griffin’s birth place, her family home with Josiah Parker and her final resting place in our Nelson cemetery.

As Nancy said: “I think both my Mom and her friend Peachy would find what we are doing to be a fascinating and satisfying endeavor. And, I somehow like to envision that Sophia as a little girl may have dreamed of going places but never really had that chance, so maybe-just maybe-she would be pleased to know that she really did travel —quite a bit.  And that this time she’ll be on her first flight as we end this interesting tale by “taking Sophia home””.