Solomon Kitteridge moved to Packersfield from Amherst, New Hampshire after service in the Revolutionary War. According to his pension records he served at Bunker Hill in 1775 and at “The Cedars” southwest of Montreal where he has taken prisoner. He was exchanged and reenlisted, fighting at the Battle of Bennington in 1777. In 1778 he moved to Packersfield where his first son, Solomon JR was born on September 28th. Solomon and his wife, Rebecca, had eight more children here before leaving for Mount Vernon, NH in 1798.

James and Betsey Clark of Townsend, Massachusetts bought the farm in 1798. He ran a cider mill there.  In 1829 he sold the place to his son, Samuel Clark of Andover, Vermont, but continued to live there under a lease arrangement. Betsey died there in 1842 and James in 1849. They are buried in the cemetery on the old town common. 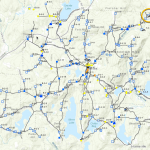