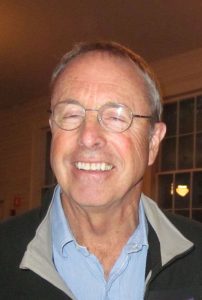 Still smiling after all these years!

This was in the mid-sixties.

It was a rather warmish, foggy night in January. I had come back to New Hampshire to go to the contra dance – in Dublin, as it happened. I ran into Barry (Tolman). We were outside drinking beer, leaning on someone’s pickup, along with some other fellows. (Beer not done in these times – at a contra dance, I might mention.) Barry was saying, “I should be back over at Tolman Pond; there’s a bunch of people sledding over there.” I thought, well, that’s interesting, but there’s a dance going on. And there’s a certain person in there. Mary. (Note: Mary Robinson, from Nelson, whom he later married in 1969.) I had met her at a dance late summer and was hoping to catch a glimpse of her, maybe swing with her, maybe even have her for a partner! All of which came to pass. Dance over. Home she went, with parents.

Now what? As I said, it was a rather warmish, foggy night in January. There was some kind of sledding going on at Tolman Pond. What the heck. I drive through the fog to the Pond. There are cars, pickups. I could see people in the Ski Room of the old farmhouse, a gathering spot for guests at this inn for many years.

I walk in innocently, perhaps somewhat akin to the lamb to the slaughter. They set upon me with great smiles and delight. There was a plot. Of course I had no idea that there was a plot.

Remember, it was a mid-winter night of warmth, fog. And ice. You see, Arnold Miner, the road agent, was fully complicit in this plot. No sanding had been done on Tolman Hill.

It all happened so fast. Now I’m in the back of Fran’s (Tolman) old International Scout pickup. Along with four other carefree fellows. Laughing, chatting, unconcerned. 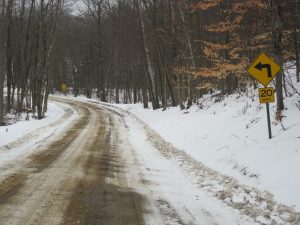 Today: the curve at the bottom of Tolman Hill

We are headed to the top of the Hill of Ice. Complete with fog. And the curve at the bottom. We pass a bonfire just over the big snow bank on the outside of the curve. We pass kerosene pots, lit, in the ditch, every so often. 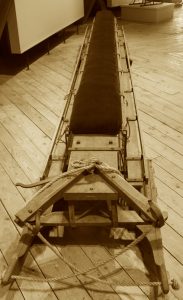 Then I notice the sled: longer than the usual. Steel runners, two handles at the front on either side. Might the driver possibly exert a bit of control over the direction of this thing?

(Note: Barry called this kind of sled a traverse, and he thinks it was made by Arnold Miner. He remembers that it looked something like this one that’s posted on the Internet.)

Sled is getting set. 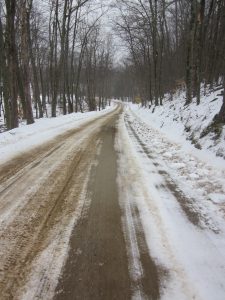 Driver: Arnold Miner, complete with logger’s hard hat, lying flat, hands on the steering. Face first. Then, Doug Tompkins, Barry, myself, all sitting up. Last, there is Bud Seixas, who was to push. So we can get a running start, of course. We are moving, Bud pushing on me, into the dark, the fog, the ice. Faster. Bud’s running. He lands on the very back of the sled, on his knees, his fingers grasping the collar of my coat. Arnold fights to keep the heavy sled and passengers out of the ditch.

A kerosene pot whooshes by. Peering around Barry, I could barely make out the next one. The sled rocking, I’m about half choked as Bud clings to my collar, fighting to stay on and upright. (I’m thinking, man, he’s got quite a high center of gravity for this.)  Ever faster. The curve looms, the bonfire, shadowy figures.

We hit, and I am flying through the air.  I am lying now in the snow, over the bank, with snow all up the back of my jacket. As I stand up, I am able to deduce that I’ve done a complete front flip, to a soft landing. Nary a scratch. I clamber back over the snow bank. Guys are standing, brushing off snow. Barry had a few cuts and scrapes on his face, I recall – that you could see – but didn’t let on, anyway, that there was anything else. I doubt Arnold had been able to move that sled an inch.