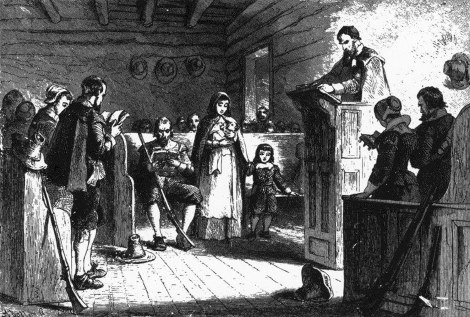 A possible resemblance to a service in the Nelson Meetinghouse.

The Second Meetinghouse was built in 1786 when the town, then called Packersfield, replaced its original Meetinghouse with a magnificent one modeled on one in Wilton. The town of Hancock, in turn, modeled their new meetinghouse on Packersfield’s. It was forty-five by sixty feet and twenty-eight feet tall at the eves with a steeple, and porches on either end. Twenty-seven different Packersfield men supplied the materials and master builder, Benjamin Tenny, and two full time assistant workmen, Lt. Archaelus Wilson and Mr. Allen Breed, largely built it.  Wilson and Breed chose additional “under workers.”

A raising was required to erect the frame: posts, 28 feet long 12” x 12” red oak; pine plates, 60 feet long 10” x 8”; and the beams, 49’ feet long 12” x 12” at the ends, 15” x 12” in the middle. Raising Day was took place on September 8, 1787 and the town “voted to treat the spectators with liquor on the common on the raising day at the discretion of a committee chosen for that purpose.” The committee members chosen were Samuel Griffin, Solomon Ingalls, Samuel Warren, William Barker and Peletiah Day. The town voted to accept the building as finished at a meeting in early December 1794. Religious and civic meetings were held down the hill, at the home of Uriah Wheeler, until the building was finished enough to move the meetings there.

The magnificent new Meeting House was a huge expense for Packersfield. The Town raised two hundred and fifty-five pounds initially and had to raise an additional one hundred and fifty dollars to finish the work at the end. The Town sold three of the lots set aside by the original proprietors for the support of schools and for public purposes. These were one hundred acre lots in the Southwest Quarter; their sale raised 203 pounds 4 shillings. About 40% of that was paid in silver, 42% in grain and stock and the balance in notes. Allen Breed paid for his purchase with twenty-four quarters of beef. They sold a small piece of the original common to an abutter.

Other things brought in money, too. The old meetinghouse was sold for twelve pounds.  The town successfully petitioned the legislature for permission to levy a special tax at one penny per acre for three years. They auctioned the pews in the new meetinghouse with the highest bidder getting first choice. The minimum bid was three shillings.

The meetinghouse was used as both a church and a space for town meetings until the Congregational Church was completed.  It must have been an imposing structure high on the hill and surrounded by as many as sixty horse houses.

Editors note:  This is the third and final article in a series relating the founding of the first ministry in Packersfield.  The first detailed the many efforts to acquire a minister for a small, remote community. Several ministers came for trial periods and several offers of employment were [...]

The original charter of Monadnock Number Six stipulated founding a successful town in accordance with the king’s requirements. The charter contained requirements to establish and support of religion and education. Three of the grantors’ shares in the town, a total of six one hundred acre lots, were reserved  [...]

A possible resemblance to a service in the Nelson Meetinghouse. The Second Meetinghouse was built in 1786 when the town, then called Packersfield, replaced its original Meetinghouse with a magnificent one modeled on one in Wilton. The town of Hancock, in turn, modeled their new meetinghouse on Packersfield’s. [...]

In the early development of manufacturing, areas that afforded the potential for water power were prime locations for community growth. In 1814, the Cotton Factory was built in a remote section of Nelson to take advantage of the water power from the outflow of the dammed Factory Lake, [...]