Eleazur Twitchell was one of the earliest settlers on Monadnock #6. He bought his first land here in 1769 and built the home here in 1772.The family was originally from Sherborn, Massachusetts. Though he built a log house here early, owned hundreds of acres (Including all of Harrisville Pond) and had 25 acres cleared by 1773, he was a part time resident of Packersfield. He and Martha had eleven children and only one may have been born here. (She was probably born at the home of her uncle, Abel Twitchell, just over the line in Dublin.) Abel was the developer of the first mill at the outlet of Harrisville Pond. Most of the children were born in Bethel, Maine. Eleazur probably replaced the log cabin with a proper house early with lumber sawn at brother Abel’s mill. In 1780 they moved to Bethel permanently and Joseph Searl occupied the home briefly. He was followed by the Thomas Kidder family1780-1787.

Samuel Scripture JR. bought the place from Kidder’s heirs in 1787. Samuel came to Packersfield from Mason after serving in the same regiment with his father from the Battle of Bunker Hill through a campaign in New Jersey in 1779. He brought his parents, Samuel SR. and Mary, with him to Packersfield when that man was sixty years old. The two generations shared the same house and farm.   Samuel Jr and his wife, Betsy moved to Packersfield with two children and had nine more here, Hills Scripture was the first (1788) born here. Samuel lived there util his death in 1852.

At some point the original house was replaced with the current one. 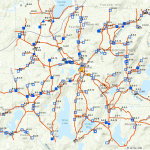