Timothy Bancroft of Barnstable, Massachusetts bought the Right of Benjamin French (400 acres) in the southeast quarter of Monadnock #6 early. He sold 100 acres here in 1770 to his son, James. James acquired the balance of the French Right after his father’s death in 1780.

James bult a board house here as early as 1771. By the settlement survey of 1773 he had 20 acres cleared and 14 more cut over. He and his wife, Lucy Whitney had nine children. James saw service in the Revolution and served on the Committee of Safety that arrested Breed Batchellor. He and his wife were charter members of the church.

Samuel Warren bought 124 acres and the house from James Bancroft, in 1786.  He sold to Noah Hardy in 1797 who moved here from D-4-2. Hardy established a cooperage nearby. In 1819 Hardy sold to his son-in-law, Benjamin Miles Buckminster and the two families shared the house until they moved to Antrim in 1828. The house was abandoned then. 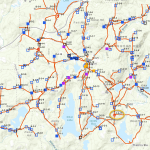 Note on the location of the James Bancroft houses.

In his Sketch of the Early History of the Town if Nelson, New Hampshire (published in the Nelson Clarion in 1871), Simon Goodale Griffin writes this abut James Bancroft: “… and James Bancroft, who settled in the south part of the town, on the hill north of the late homestead of Joel Bancroft.”  Bancroft bought 100 acres of land on the hill where D-2-11 is from his father, Timothy, in 1770. After that man’s death in 1780, he bought the rest of the French Right including the piece where D-2-6 is located.

The One Hundredth and Fiftieth Anniversary of the First Settlement if Nelson, New Hampshire 1767-1917 places James Bancroft’s location as “Settled in the southeast part of town where Joel Bancroft subsequently lived.” Struthers refined that further: “Settled in the southeast part of town with his brother Timothy, in on old homestead one-quarter mile south of Dea. Noah Hardy.” Those escribe the location of D-2-6. Noah Hardy lived at D-2-11 from 1797 to 1828.

The evidence to support this sequence is as follows:

James Bancroft did not own the property at D-2-6 until well after the 1774 survey listing him with a board house.

Simon Goodale Griffin was a Nelson historian who was born in town in 1824 and lived here until the Civil War. His description of James Bancroft’s early location would have been based on what people understood in the 1850, some fifty years after James Bancroft left, but while his nephew, Joel, lived at D-2-6. Obviously, Griffin knew Joel Bancroft personally.

The cellar hole at D-2-6 is quite large and made largely of cut stone suggesting a later date than 1774.