There are two cellar holes here. The one near the road is small (20×25’) and 150’ up the hill is a much grander one (36×45’.) This was first settled by Samuel Heaton prior to 1794 for in that year he sold it to Dr. Cooke Lott and moved to Keene. Lott kept a tavern here. It seems Lott probably built the larger place and abandoned the smaller one. Lott sold it to Samuel Bassett of Keene. Samuel Bassett owned the place from 1801 to 1804 when he moved back to Keene where he died in 1834. He was succeeded by his son, William, and it was occupied by the Bassett family until it was purchased by Samuel Wadsworth in 1828 and added to his farm. The house was abandoned at that time. 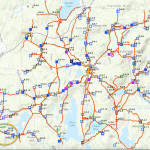