The approximate location of a house built by Samuel Derby on a hill above the west side of Silver Lake (then called Breed Pond) as early as 1813. Samuel and Hannah (Minot) Derby moved to Derby Hill from Littleton, Massachusetts and brought most of their fifteen children with them. The Minot family were early investors in land in Monadnock Number Six. Hannah’s grandfather had purchased land in the town in 1759. A cousin, Sally Minot Melvin had settled in Packersfield in 1792.

This lot of fifty acres was not part of the Minot holdings and was purchased for back taxes in 1813 by Derby. There was some confusion over the title, but that was rectified in 1819.

In 1822 their son, Samuel, married Lucretia Farwell, daughter of Samuel and Eunice Farwell who lived a mile or so away at D-2-5. It is unclear which set of parents the young couple lived with at first, but they purchased this farm from his parents in 1826. They had eight children before selling the farm to Joel Barker in 1835 and moving to Dublin. Joel Barker used this purchase to expand his farm south from his home at B-2-7. The place does not appear on the 1858 County Map and was probably abandoned by 1840. 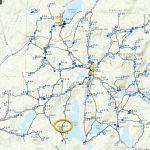