A large number of Packersfield’s early settlers came from Rutland, Massachusetts in the mid to late 1700s and settled in the southwest part of Packersfield near the Batchellor farm, Ruth Batchellor herself had been a native of Rutland. As such the settlers formed a natural community within that corner of Packersfield. In those days access to a meeting house for religious services was even more important than having a school.
The village that was to become Roxbury had a school early and built their own meetinghouse in September of 1803.

Samuel Wadsworth writes that the original building was plain with no belfry, spire, porch or other ornamentation. It was larger than its later replacement which was 32 x 42’. Construction was financed by subscription among the local residents and by the selling of pews. Packersfield’s minister at the time, Gad Newell, conducted services there one Sunday each month.

In 1849 a replacement was built by Cyrus W. Woodward at a cost of $450. He used parts of the original, older structure. The building was later abandoned in the 20th century and was removed in 1958. A monument to the old building marks its location. 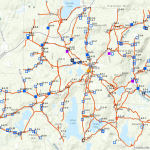