In 2002 Rick Church and Dave Birchenough  embarked on a project which remains ongoing, to research the old roads and cellar holes of Nelson. Following are Rick and Dave’s notes about the project.

This project involved weekly sessions in the Town Archives, literally turning the pages of the records of old meetings from 1753 to the present. Old roads are described by who they served and usually connected people with other roads that could get them to the meetinghouse for religious services and town meetings. Initially we thought we could rely on Parke Struthers’ A History of Nelson New Hampshire 1767-1967 for the location of early inhabitants and for interesting biographical information as well. We found there was a great deal missing and numerous hours were spent transcribing property deeds at the Cheshire County Registry of Deeds to find the location of early dwelling places. That has resulted in an archive of perhaps 6,000 property records. We then discovered Historical Notes with keyed map of Keene and Roxbury, New Hampshire, by Samuel Wadworth, written in 1910, but not published until 1932. While there are some omissions in this account, virtually no errors have been discovered, giving credibility to the information. 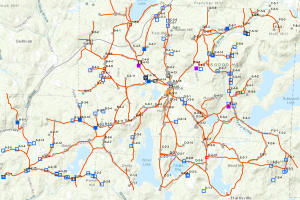 As we sought a means to preserve this work and make it easily available to the public, we met Steve Lamonde from Antioch University, whose knowledge and enthusiasm for LiDAR technology and story-mapping introduced possibilities for even deeper research, and a means to present it. The result is the dynamic map created using Arc GIS and available for exploring on this website.

For a variety of reasons there are complexities inherent with the use of this map, including the amount of information that must be presented within a small space. Before spending much time playing with the map, we encourage you to review the MAP Facts and FAQs.

The work presented here is based on other sources as well. We have attempted to include material we felt to be factual and interesting. We include references to both Struthers and Wadsworth in the form of map co-ordinates for those having access to those sources who may wish more detail. Where we differ from those sources, we have attempted to be clear about the substance and source of the differences.

A significant benefit to this information being Internet-based is that it remains dynamic. As more information becomes available to either supplement or correct information, changes can be made.

Cheshire County Registry of Deeds: Deeds documenting the transfer of property include the seller (grantor), the buyer (grantee), the price, the date of the sale, the vocation of the parties (up until about 1850), their town of residence and a description of the property. There is often other information like the presence of buildings, the names of prior owners and indications of life’s difficulties like death, incompetence, foreclosure. They often include the names of abutters and the presence roads. These do not present a complete record. Deeds on file in the Registry are contemporary copies of documents held by town clerks. There are many that are missing. One large limitation: few women held title to property in the first hundred years of Nelson’s existence. Single women and widows are the exception. Therefore hey are largely absent from the legal record.

Cheshire County Probate Records: These are on microfilm at the Historic Society of Cheshire County and can provide insight into the circumstances of the deceased and his/her family.

Nelson Town Records: These are held in the Nelson Town Archives and have been professional preserved and cataloged by Bert Wingerson. Sadly, many of the records in the late 1840’s are missing.

New Hampshire State Archives:  This valuable state resource holds deeds to property that date during the pre-settlement of Monadnock #6 (1753-1766) and the original layout of the town drawn on vellum by Breed Batchellor and approved by Thomas Packer.

Batchellor, Albert Stillman, Editor of State Papers: Town Charters Granted within the Present Limits of New Hampshire and an Appendix containing documents relating to the most ancient towns of this state and historical notes and monographs Volume XXV Town Charters Volume II.

These two volumes contain the original grant of Monadnock Number Six, The Town Charter for Packersfield and settlement surveys conducted in 1773 with names and locations.

Griffin, Simon Goodell; Sketch of the Early History of the Town of Nelson, New Hampshire; originally published in the Nelson Clarion 1871.  Griffin was a grandson of Samuel Griffin, one of Nelson’s founders and a major general in the Civil War. He was born in Nelson in 1824.  This work seems to be based on NH State Papers, Revolutionary War records and anecdotes of Nelson’s past in circulation at the time of its publication.

Nelson Picnic Association; Celebration of the One Hundred and Fiftieth Anniversary of the First Settlement on Nelson, New Hampshire 1767-1917
This 192-page booklet contains the names and records of the pioneer settlers of Packersfield who served in the War of the Revolution. It often gives important biographical facts about the early settlers in Packersfield as most had some service in the war. It often records their town of origin, their location within the town and their subsequent places of residence. The source of the biographical content is not stated. There are extensive records of individuals’ Revolutionary War service. These accounts are based on official military and pension records. This book is clearly a source for Parke Hardy Struthers and Samuel Wadsworth. It is a substantial source for the biographical material in our place descriptions.

This volume has been central to the project. Charles Bemis was hired by the Town of Nelson to write a town history. He died before completing the project and Parke Struthers used what Bemis had accumulated – largely genealogical information—plus the Nelson Picnic Association’s booklet, General Griffin’s Sketch and Samuel Wadsworth’s book along with the contributions of others to fashion his history. He seems to have had access to the church records which are now missing. Struthers created a map of Nelson with old homes and cellar holes on it.

It is the inspiration for this current effort and it contains numerous errors. Some are editing errors like dates that are off by an even 100 years, but some are miss-interpretations of other sources. Where Struthers’ interpretations conflict with other sources, our work relies on primary sources like town records and property deeds.  Those records deal only with property ownership and are silent on dwellers who might have been tenants. Some of his biographical information is impossible to verify. We wish we had access to his sources, but they were not left for us to examine.

Wadsworth, Samuel; Historical Notes with keyed map of Keene and Roxbury, New Hampshire, Keene, NH 1932.  Wadsworth was a descendant Captain Samuel Wadsworth, an early resident of Packersfield in the part that became Roxbury in 1812. The author was a surveyor and amateur local historian. He was a founder of the Historical Society of Cheshire County and its first president. Wadsworth produced a book with a very accurate map with information about each inhabited site from the center of Keene east through Roxbury and well into western Nelson. His descriptions are based primarily on deed research supplemented by local knowledge from contemporaries. The wrote the piece in 1910, but it was not published until 1932. I have found some omissions in his cellar hole descriptions, but virtually no errors. In fact, if I had access to his notes, seemingly lost, I assume they’d prove his work universally correct. As much of the work pertains to Roxbury and that part of Packersfield was split off in late 1812, my descriptions rely almost entirely on his work.  I take some pleasure in having found a few locations he was aware of, but did not locate on the ground.