Brothers Richard, Absalom and John Farwell arrived in Packersfield from Marblehead, Massachusetts early. All were signers of the Association Test in April 1776. Richard saw service early in the Revolutionary War serving with his brother, Absalom at Bennington and Saratoga. Richard, the youngest of the three, bought 120 acres of land here in early 1774. He built a house near here, in time to welcome his third child, Mary, on November 2, 1774. Richard and his wife, Susannah Picket, had a total of ten children. Richard died in 1817 and Susannah the following year. Both are buried in the village cemetery.

His son, Absalom seems to have inherited the farm, but he soon sold it to his brother, Robert, who had been living there with his wife, Polly (Bassett) and their children. Robert and his family moved to Ohio in 1824 and sold the farm to James Derby. James married Richard Farwell’s granddaughter, Sarah (parents: Foster and Betsy (Gurler) Farwell) and bought the Farwell homestead in 1824. James and Sarah raised even children in the old farmhouse before their deaths in 1867 and 1866. The place seems to have been occupied fir sometime after their deaths, but it was replaced in 1901 by Corban C. Farwell. The property has been listed in the National Register of Historic Places, The description follows: 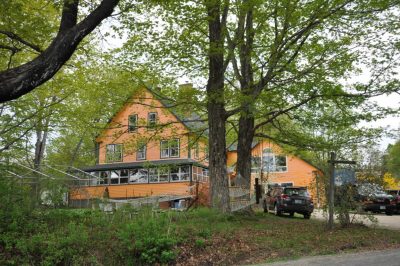 The Corban Farwell Homestead is located in a rural setting west of the village center of Harrisville, at the junction of Breed and Cricket Hill roads in the town’s Silver Lake area. It is a ​2 1⁄2-story wood frame structure, with a gabled roof and clapboarded exterior. The house is distinctive as a late example of Greek Revival architecture, albeit with a number of Colonial Revival features added, as well as bands of scalloped wood shingles typical of the Queen Anne style. An enclosed porch runs across one facade and along part of another, and the main block is joined to a large carriage house.

Corban Farwell built this house in 1901 on land that had been held among interrelated families since the 18th century. He was a purveyor of farm supplies, selling fresh milk and eggs to the summer residents of the resort community that sprang up around nearby Silver Lake. He also sold land along the lakeshore for expanding that development. 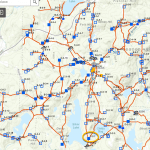