Recollections from Henry and Judith Putzel

Recollections from Henry and Judith Putzel

From Summer to Settler: This is one of a series of interviews conducted by Tom Murray. He is especially interested in talking with people who became “year-round people” after having spent time in Nelson as “summer people.”

Recollections from Henry and Judith Putzel
An interview by Tom Murray
June 23, 2010
Compiled from the transcription by Tom Murray. 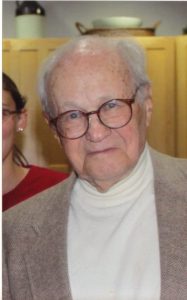 Henry Putzel* was originally from St Louis. Work took him to Washington, DC around 1941, where the family lived for 43 years – including his wife Eleanor, more commonly known as Nory, and their children: Pete, Roger and Judith.

The Original Nelson Connection
As an undergraduate at Yale, one of Henry’s classmates was Bill House. They became roommates in graduate school. Bill House was well known in this area as a surveyor and forester. Henry says Bill was also quite the mountain climber and a member of the first American expedition to K-2, one of the most challenging Himalayan peaks. They stayed in touch, and Bill recommended this area to Henry.

Henry said the kids felt they had exhausted the seaside recreational opportunities of Washington, Virginia, and the Delaware Valley, and that moving further afield was desirable. They came to Tolman Pond for the first time in 1951, and immediately appreciated the opportunities for canoeing, swimming, hiking, fishing, tennis, and trips to Keene and Harrisville. The first year they stayed at an isolated cabin on the south side of the pond, down the long driveway, or a boat trip across the water. The cabin was not completely isolated however. One morning Mrs. Putzel was skinny dipping and Bill Moore, another tenant from across the pond, rowed up in his fishing boat and began a conversation where he had complete control over the length, because she wasn’t getting out of the water until he rowed on. Eventually this cabin was torn down.

Early Recollections: People, Places, Occurrences, Events.
Summerfolk were referred to as outlanders or flatlanders. Fran Tolman, grand host at the Pond, was remembered for his garbage detail which the kids flocked to, as well as hosting tennis, natty dressing, linoleum block prints, writing, moderating town meeting, and being Clerk of the NH legislature, once he figured out it was a paid position, unlike being a representative which he also had been. He wrote Mosquitobush, a collection of Yankee stories with accompanying block prints. He also said he was a versatile piano player and that he could play anything as long as it was in the key of F. Floppy, Fran’s wife, was remembered for her wit, writings and confabulations. Her writings were well remembered. Foulard’s for Fran were made by Floppy.

Judith attended Vassar from 1964-1968 and U Mass Graduate School from 1971 to 1975 and became good friends with Newt and Janet Tolman, often visiting. Newt and Janet were both licensed partridge and woodcock guides. There were very few female guides. Henry remembered trips to find the birds but without shooting. The dogs remembered were English Setters, pointing hunting dogs. Newt would have a pistol full of blanks which he would occasionally fire off to acclimate the dogs to the sound of gunfire. Skeet shooting was observed. Janet’s artwork was remembered: one painting of Judith with her first golden retriever and another of Stone Pond’s St. Francis Chapel.

Judith says she still has many letters and tapes from Newt who used to refer to her as his counselor since she was in graduate school for such expertise. Janet often went to Rockport, MA for the painting summer. Newt of course played the flute and was active in the music scene, as well as being a writer. Judith has a son Justin, and Newt referred to him as the Emperor. Janet asked Henry to bring a type of tree from Virginia whose shape she had admired. Henry figured it wouldn’t be hardy enough, but brought it anyway. At last sighting it was over thirty feet tall.

Newt had a thing for Rolls Royces and managed to buy four, three early in life, and then another near the end of this life from proceeds after selling off much of his land to Cersosimo Lumber. That sale was eventually reversed.

Henry Fuller was remembered as having a job at a brokerage house in NY and driving up in his Cadillac to Keene, and then switching to a beat up old Subaru for the drive out to Nelson. Conjecture was his wealth came from his father’s manufacturing of fire engines and locomotives in Manchester. Early on he developed a liking for Hudson River paintings and collected quite a few, later donating them to the Currier Gallery in Manchester. He also bequeathed $80 million to Dartmouth and $45 million to Trinity College. His paperweight collection was also noteworthy. He couldn’t cook worth a damn, and Judith said that her dad and Henry Fuller were so cheap that they’d split the cost of a New York Times and share it.

Al Quigley or Quig was remembered as an artist, musician and framemaker, often making ends meet through bartering. He also learned violin making in Maine.

Henry remembered that May Sarton, who lived in the village for a while, gave an Old Home Day address. Her annoyance at restless (but normal) kids was so outspoken that the crowd turned against her. One of Ernest Hemingway’s wives, Martha Gelhorn, also an author, came to the area for a week or so.

Margaret Redmond had been one of the Pennsylvania Settlement group and the stained glass windows that she donated to the original Olivia Rodham Memorial Library were moved from that old library to the new one.

Many people from the area would stop and visit the Putzel’s in Washington, DC if they were down that way: Riley’s, Tolman’s, House’s.

Places
Tolman Pond was the right size to let kids be independent, but still in sight. Fourth of July picnics were remembered. The loading and firing of the cannon seems to be a memory for everyone.

Henry and Judith spoke of the still functional ice house, packed in sawdust, near the farmhouse. Judith remembered formal Sunday meals at the farmhouse presided over by Ma Tolman who made pies and breads. They mentioned peacocks and frogs crossing the road between the farmhouse and the beach. Judith remembered there were lots of snakes. Raw egg toss and barn pong were also remembered. Barn pong was distinguished by the barn’s walls being in play, sort of like table squash.

Over the years they had rented almost all the different cabins: the cabin by the beach, the Grey Ghost and one of Fran and Floppy’s cabins which they called the Palace. One of the cabins on the hill had a steep or narrow entry that Mabel, the large farmhouse helper, couldn’t fit through, so she’d walk around to another entrance on the side of the house. They also rented Bill and Lanie House’s house at Silver Lake and various cottages at the Hill Camp above Silver Lake.

Judith attended Hill Camp at Silver Lake on Sunset Road from 1956 to 1961. It had between 60 and 100 kids. She remembers it being run by the Shortlidges: Anne, Peg, Johnny, Jill, Mary Jane and George. Hill Camp was for girls, Marienfeld was for boys. It ran its course by the early 1960s and was acquired by the prep school Browne and Nichols. Others involved at Silver Lake were Wally Francis and his wife Mamie. Part of their land was deeded to the Audubon Society and is now known as Sucker Brook Preserve.

Slices of Life
Party lines were remembered fondly. Judith says if you needed to find your parents just call anyone on the party line and someone would know where they were.

Afternoon was remembered as the starting time for tennis at Tolman Pond. The egalitarian nature of getting all involved was remembered fondly. Sidney Partridge’s hearing, or lack thereof, was noted as was his penchant for calling all balls the way he wanted them to be regardless of where others seemed to think they were. The wagon at the tennis court was recalled, as kids climbed over it as both entertainment and a vantage point. Ms. Kit Henry of Peterborough was playing once, and she had some new undergarments that allowed women to stick the extra tennis balls under their skirts for holding between serves. Newt was in attendance, and Judith remembers him staring intently and saying “where is she putting those balls?” Judith remembers a Tolman Pond vs. Silver Lake Tennis Tournament.

Once the Putzel’s were preparing their Plymouth station wagon for the return trip home. They had a tarp laid out over stuff on the roof rack and it had the shape of a person with a fat tummy lying on his back. Fran Tolman arranged some tennis shoes at one end making it look like a corpse. The Putzel’s noticed the odd looks they were getting, but didn’t spot the cause until a gas stop on the Jersey Turnpike.

Fourth of July cannon firings were recalled. Henry saw a similar cannon in Peterborough explode once with pieces landing at their feet. The slow burning fuse at Tolman’s was recalled. The loud noise so frightened her dogs that Judith steered away from the Tolman Pond Fourth for a while.

There were some Pig Roast’s at the Robinson’s. Women gathered garlands for the suckling pig. By the fire, and after considerable socializing Newt says, “I have been asked to read Lamb’s essay on a roast pig.” Ed Faulkner interrupted and said don’t you mean half-asked? That was typical of the wit, irreverence and informality of Tolman Pond.

When Henry had bought property, the former Parsonage behind the Nelson Church, it needed a winter caretaker. Win French first filled that job. One year Henry asked Dot Warner to do it and after that Win didn’t speak to them!

From Summerfolk to Settlers
They also knew the Colony’s from Harrisville and the Putnam’s from Keene, also both Silver Lake property owners, and hence had broader connections in the area. Henry was active with the relocation of Nelson’s library from the old to the new site.

In 1981 the Putzel’s became owners. They bought the parsonage behind the Nelson Church, and around this same time Judith bought 10 acres from Newt adjacent to Greengate. She held that property for 12 years before reluctantly selling it in order to acquire her place on Breed Pond Road and Silver Lake in 1993. Henry and wife moved here full time in 1984 and stayed till relocating to Rivermead in Peterborough. Judith later bought Julia Pakradooni’s place on Lead Mine Road in 2007.

*Read more about Henry Putzel in the book HP-My Story. A copy is available at the Olivia Rodham Library.