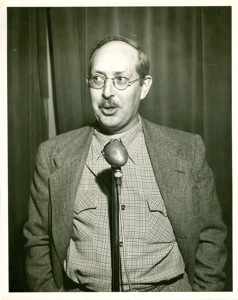 Ralph George Page was born in Munsonville, New Hampshire, on January 28, 1903, into a Scottish-Irish family whose ancestors included Irish minstrels, a grandfather who was an Irish dancing master, an uncle who was a square dance caller, and a father who was a fiddler.

Based in Keene, New Hampshire, “Uncle” Ralph became the top authority in the field of New England Country dancing. On December 6, 1930, Ralph started calling contras, almost by accident. He was playing fiddle in an orchestra when he had to substitute for a caller who had come down with laryngitis. That day was December 5, 1930. From that beginning, he rose to the top of his field as an Eastern contra caller, becoming one of the country’s first full-time professional callers in 1938, known as the “Singing Caller of New England.” He was a featured caller at the 1939 New York World’s Fair. His choice of music was great, the dancing smooth and elegant, and always there were the pithy, clever remarks from Ralph over the microphone.

Though Ralph’s success eventually found him traveling a lot more outside New Hampshire and New England, to this day he is associated with the Nelson Town Hall. Not long before he died, in 1985, he came out of retirement for a special dance in Nelson – an opportunity for a new generation of dancers to experience his calling. He is buried in the Munsonville Cemetery (Munsonville being a part of Nelson).

Click here for a longer biography of Ralph Page.

From 1949 to 1984, Ralph single-handedly published 165 mimeographed issues of his Northern Junket magazine, which contained editorials, recipes, stories, dance notes, and sheet music for squares, contras, and international folk dances, and sheet music for many folk songs. He took great pride in publishing 18th and 19th century dances which his research had uncovered. His interpretation of obscure dance directions from old books and manuscripts found in the Library of Congress and elsewhere made it possible to revive many beautiful old dances such as The Market Lass and British Sorrow. Some fifty of these dances appeared in Northern Junket and his books, Heritage Dances of Early America and An Elegant Collection of Contras and Squares.

The complete set of Northern Junkets is digitally archived at The New Hampshire Library of Traditional Music and Dance periodicals and is available here.

Stories from the Old-Timers

In October, 2004, Lisa Sieverts sat down with old-timers Frank Upton, Renn Tolman, Barney Quigley, and Dudley Laufman, to collect some stories about contra (square) dancing and Nelson. These short videos were edited from the 90 minute interview.

From 1949 to 1984, Ralph single-handedly published 165 mimeographed issues of his Northern Junket magazine, which contained editorials, recipes, stories, dance notes, and sheet music for squares, contras, and international folk dances, and sheet music for many folk songs. Though he lived in Nelson, his popularity had him traveling all around the country and beyond.

In this New Hampshire Crossroads Program from 1983, Gordon Peery innocently perpetuates the myth that there had been dancing going on in the Nelson Town Hall for 200 years.

Music and Dance in the Nelson Town Hall: The Myth, the Magic the Truth

What's behind the legendary status of the Nelson Town Hall? This video is from a Zoom presentation made for the Olivia Rodham Memorial Library, on December 19, 2020. Lisa Sieverts (dance caller) and Gordon Peery (piano player), both long-time participants in Nelson contra dances, have unearthed some charming nuggets of local history. Look to the right for links to other resources. [...]

Not too long ago a piano tuner submitted a bill for work done on the piano in the Nelson Town Hall. With his invoice he included the following comment: “Because of the age of this piano and long abandoned construction practices, it is impossible to give this piano a highly accurate tuning. It has numerous false beats, inharmonicity, and heavy wear. Surprisingly, the overall tone is superior and the action is still fast and responsive. I suspect the piano is favored by those who play on it.”

Listen carefully, these are the symptoms: increased heartbeat, memory loss, neuromuscular discoordination, heightened respiration, profuse sweating, confusion and fatigue. The above symptoms are exhibited by all greenhorns, newcomers and beginners at a Nelson Contra Dance. I speak from recent experience.