This modest cellar hole on the east side of the Nelson Road near Child’s Bog in Harrisville is one of Nelson’s oldest. Philip Billhash came as early as 1772 and had a pole house and fifteen acres cleared by 1774. That year the town laid out and built a road to his cabin from the Dublin-Meetinghouse road. He sold the place in 1782 and moved to Dunstable, Massachusetts. It had several absentee owners from 1782 to 1822 when it became part of Samuel Farwell’s farm. 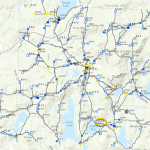