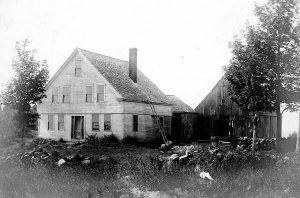 James Banks bought land here in late 1778 and is credited by Struthers with building the house. Perhaps he built a small part of the substantial house that strands there today though he did not own the property long. It is likely that Philip Atwood build most or all of the house. Philip moved to Packersfield from Templeton, Massachusetts in 1780, married Ruth Gates from Bolton two years later.  The couple had eight children over the ensuing fifteen years. In 1819 Ruth died and Philip married Samuel Griffin’s widow, Sophia.  They lived in the home until their deaths in 1846 and 1841 respectively. All are buried in the village cemetery.

Philip sold the place to his son, Rufus in 1819 three weeks after his son’s marriage to Lucretia Goodenow. Lucretia died in 1823 three weeks following the birth of an infant son who himself only lived six days. Rufus remarried and had six more children before moving to Nashua.

Jeremiah Foster bought the farm in 1846 and lived there until he died in 1866. The farm was sold to Charles Sweetzer. The next twenty years saw many owners: Edwin Knight, Henry Chapin, Mathew Lavin, Elizabeth Nash, Rufus Green and Willard Curtis. In 1894 Thomas Lightfoot bought it. His daughter and son-in-law Mary and Robbins Millbank took over the property. It has subsequently changed hands a couple of times. 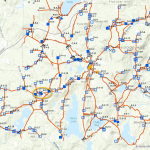 In 1898 the town sold Schoolhouse #5, which was adjacent to this property. That site, and the Schoolhouse, is now part of this, hence the name Schoolhouse Farm.

Read about the Schoolhouse.