The approximate location of a house obscured today by modern activities.

Philip Atwood II, son of Josiah Atwood, bought two acres here in 1804 and built a modest house across the road from his father (C-4-20.) In 1819 Josiah sold a half interest in the farm to Philip; he transferred the balance in 1833. In 1810, Philip sold this place to Laban Gates who lived here from 1810 to 1824. Laban moved to Packersfield from Hanover, New Hampshire with his wife, Huldah and four children. Huldah died soon after their move and Laban married Anna Bigelow. They moved to Keene in 1824 and sold the home to Susan Felt.

Susan was the oldest child of Samuel and Susannah Felt who born at F-2-5 in 1788. She was thirty-six when her father was declared insane and his house foreclosed on (1823). It is perhaps no co-incidence that she bought her own place. Deeds, which often describe a buyer’s occupation, list Susan as a “single woman.” She paid $100.

The next and last occupant was Noah Robbins who was here from 1833 until his death in 1841. The house as abandoned then. Noah was buried next to his wife, Lydia (d. 1827) in the Village Cemetery. 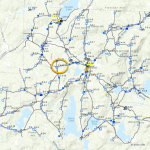