A small problem can itch and harass as much as a black fly bite and can be as hard to get rid of. For instance, 59¢ showed up on a town bank statement one year when I was treasurer. It didn’t belong to the town’s account. I had receipts for every cent I’d deposited – receipts for dog licenses, taxes, car fees – everything. My Annual Report was all ready for which-ever-gimlet-eyed auditor we were to have that year. But suddenly here was this wretched 59¢ knocking it out of kilter. How did it sneak in? How could I get it out? And, I had no authority to withdraw it from the town. So, I fussed and itched and wished the problem would just go away. 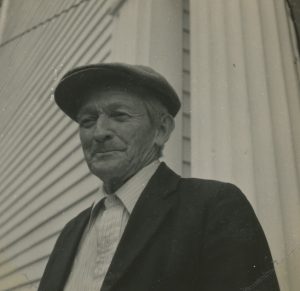 But, eventually, I decided I had to review the last few sessions I’d had with various town officers turning in fees. In fact, I’d just recently collected from Fred Murdough, the town clerk. He was a small, neat man and very precise. When I got to his house he had just finished breakfast and his receipt was ready in front of him on the table. “Just a minute,” he said, “I’ll get the money from the safe.” He put on his coat, his rubbers and muffler and went across the road to the barn. A couple of minutes later he came back shooing a hen in front of him and carrying a cigar box. He took off his rubbers, hung up his coat and muffler, and we settled down to go over his accounts. It was perfect. No errors. No extra 59¢. We each signed, using his old pen which left a liberal splash of ink across the page. Fred neatly cleaned this up by scraping it off with his breakfast knife leaving a smear of egg.

Time was running out before the audit. In desperation I came up with an idea. I re-listed my receipts, adding an item that simply read “bank error – 59¢” By a miracle, our gimlet-eyed auditor passed over it and it was published in the Town Report. I waited for an angry protest from the bank. Nothing. Time went on, and since it had been printed in a public document and not corrected I figured it was as good as an admission of the bank’s error. Problem solved!

There’s just one small irritation remaining. The bank now has 59¢ that they don’t rate – a ghost of an old itch, no worse than last week’s black fly bite.